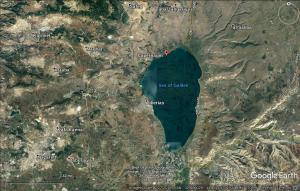 When Jesus heard that John had been put in prison, he withdrew to Galilee. Leaving Nazareth, he went and lived in Capernaum, which was by the lake in the area of Zebulun and Naphtali— to fulfill what was said through the prophet Isaiah: “Land of Zebulun and land of Naphtali, the Way of the Sea, beyond the Jordan, Galilee of the Gentiles— the people living in darkness have seen a great light; on those living in the land of the shadow of death a light has dawned.” From that time on Jesus began to preach, “Repent, for the kingdom of heaven has come near.” – Matthew 4:12‭-‬17

For some reason I have always thought that Jesus left after John the Baptist was arrested because there was some sort of conflict or competition between their ministries. I am not sure where I got this idea, but as I read this passage I am pretty sure I had it wrong. It sounds more like Jesus was being careful to prepare his disciples and his ministry before it became too well known and things became more difficult.

So Jesus withdraws to Capernaum along the northern shore of the Sea of Galilee. I explored this area using Google Earth and what is interesting is that the location that Google thinks is Capernaum is basically a farm with very few people living there. In fact the whole region along the Sea of Galilee seems strangely devoid of people and development. It would seem like in this region people would tend to live near this great “way of the sea” as it is described here.

The location where Jesus began his life and ministry after being baptized by John is both interesting and intriguing. It is described as “Land of Zebulun and land of Naphtali, the Way of the Sea, beyond the Jordan, Galilee of the Gentiles — the people living in darkness have seen a great light; on those living in the land of the shadow of death a light has dawned.”. This passage is quoting Isaiah 9:1-2. When I went back to see what I wrote about this passage I discovered that I had somehow floated by this water-related passage without reflecting on it. It is a ways back up the river so I will reflect on it here instead.

There are several details about this description that are interesting to me. The first part talks about two specific locations, the lands of Zebulun and Naphtali. These were apparently named for sons of Jacob that settled in this region. I am not sure if their mention has any special significance here. The second part “the way of the sea” is really interesting and may have deeper meaning than it first appears. The “sea” was used metaphorically throughout the old testament to represent the great spiritual expanse that surrounds our corporeal bodies here on earth. So to say that Jesus retired to the “way of the sea” was a way of alluding to the coming confluence between the spiritual and physical worlds that occurred through Jesus.

It is also interesting that the passage refers specifically to gentiles, “Galilee of the Gentiles”. I think this is an allusion to the inclusion that Jesus would practice and preach about. He came not just for the people of Israel, but for all of us that are “beyond the Jordan”. People willing to cross “the river that no one could cross” with God’s help.

The last part is not about water, but light, another interesting metaphor used throughout the Bible. Light has a way of getting everywhere that is exposed to its rays. Jesus has certainly been a light for me when times were hard.

Lest we miss the point of all these meanings and metaphors Matthew provides the Cliff Notes version of Jesus’ message, “Repent, for the kingdom of heaven has come near.” No need to spend our lives searching and striving to find God. He found us.

Prayer: God thank You for finding us and providing Your Light to show the Way.

3 Responses to A Great Light