I have been a geologist for many years. My name literally means “rock” (Peter) “between the rocks” (Wampler or Wampfler). I started out my geology “career” as an avid rock hound. My dad and I searched for everything from agates to zeolites while I was growing up. When it came time to go to college I was very excited to get credit for learning about a subject that I loved to learn about anyway. How many jobs can you get paid for hiking and camping outdoors? 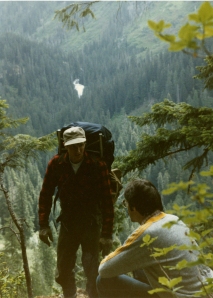 Spruce Claim in the Cascade Mountains

My summer “job” during undergraduate school was collecting mineral specimens for a miner in Washington State. I spent many weeks camping in the Cascade Mountains near Snoqualmie Pass 1 1/2 hours down a very bumpy, and frequently washed out, dirt road. I knew I was in for an interesting summer when my nervous mother dropped me off for a week in the mountains and my boss showed up with bandages on both arms. It turned out he had burned them with dynamite, a fact he thankfully did not share with my mother. I learned how to use dynamite and drill rock using a 100-pound gasoline rock drill to extract the mineral treasures out of the mountain. I survived many interesting events that summer including running down a near vertical 40-foot cliff after the rope I was using broke.

When work in the Cascades tapered off my junior year of college I was without work for the summer and ended up in Alaska on a mineral collecting charter boat. The owner had great plans to offer rich patrons trips to collect minerals all over southeast Alaska. In reality we ended with only one paying customer all summer, but that worked out just fine for me as that meant we spent more time just prospecting. This entailed boating through some of the most beautiful country I have ever seen. We took one trip from Wrangell, Alaska through the inside passage down to Ketchikan. We spent several weeks and went for days without seeing any other humans — highly recommended

After graduating with a Bachelor of Science degree from Western Washington University I worked for a Canadian gold exploration company called Sovereign Explorations as a gold prospector in Reno, Nevada. Prospecting in Nevada entailed mapping geology, cutting pounds and pounds of sagebrush, and digging soil test pits to search for gold. This included an amusing encounter with a busload of “grey panthers” (aka seasoned citizens) in Winnemucca who surrounded me my first week on the job to talk with a “real prospector” clad in field gear and driving a Jeep CJ7.

The small company I worked for followed the 80’s gold rush to Salmon, Idaho. Where I worked amid rattlesnakes and steep terrain for about a year before moving on to Zortman, Montana. I decided I would return for a Master’s Degree in geology and picked Oregon State University. I returned to school in the fall of 1990 to get a master’s degree in economic geology and Geographic Information Systems (GIS).

After completing my master’s degree I went to work for the Oregon Department of Geology and Mineral Industries in Albany where I worked as a reclamationist for 6 years. I began teaching part-time and decided that I enjoyed teaching geology more than working for the state as a “rock cop” so I went back to school for my PhD in 2000.

Which brings me up to the present. I have fallen head over heels in love with rivers and how they work, and water in general. I looked at human and climatic changes along a large river in Oregon called the Clackamas River for my PhD in fluvial geomorphology. I enjoy teaching geology very much and teach a range of undergraduate courses for both geology majors and non-majors. I am a strong advocate of hands-on education and I incorporate Google Earth and field trips whenever possible. 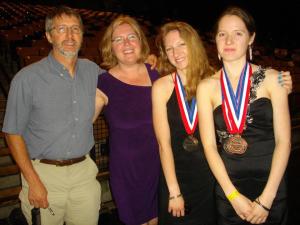 I have a wife of 31 years who remains the love of my life (she is also a geologist) and the mother of my two daughters. We have a dog named Pippin (of Lord of the Rings fame), our Pippin also “always has to look…”. We also have an adopted cat named Meryl (who enjoys kissing with her teeth and pulling on my beard and toothbrush).  We also have two “Grand kitties” staying with is Thor and Loki.  My daughter refers to them as her ninjas.

We lived in Oregon for 14 years before moving to Michigan in the Fall of 2004. We are enjoying the beauty of western Michigan and we enjoy exploring the waterways in our tandem kayaks and playing in the snow with cross country skis.

I maintain five web sites related  to my research and interests :