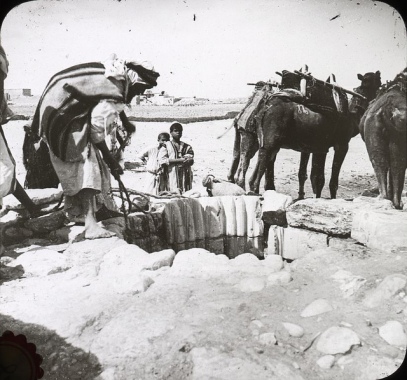 Then Abraham complained to Abimelek about a well of water that Abimelek’s servants had seized.  But Abimelek said, “I don’t know who has done this. You did not tell me, and I heard about it only today.”  So Abraham brought sheep and cattle and gave them to Abimelek, and the two men made a treaty.  Abraham set apart seven ewe lambs from the flock, and Abimelek asked Abraham, “What is the meaning of these seven ewe lambs you have set apart by themselves?”  He replied, “Accept these seven lambs from my hand as a witness that I dug this well.”  So that place was called Beersheba, because the two men swore an oath there. After the treaty had been made at Beersheba, Abimelek and Phicol the commander of his forces returned to the land of the Philistines.  Abraham planted a tamarisk tree in Beersheba, and there he called on the name of the LORD, the Eternal God. And Abraham stayed in the land of the Philistines for a long time.  – Genesis 21:25-32 (NIV)

It strikes me that that water and control over water was the ultimate status and power symbol of this time and region.  Those who possessed water could have more livestock and thus more status and power.  The treaty that was struck between Abimelek and Abraham may be the first treaty related to water described in the bible.  It appears that the control of water, in this case groundwater in a well, was tied to access and whoever installed the means to access the water (in this case Abraham).  This means that those with the technology, expertise, and resources could install wells and thus maintain control of the water.   Was the well Abraham’s or was it actually God’s? The way Abraham viewed the well would seem to be an early form of stepping away from the Lordship of God and his provision. Should not all have access to the water that is needed for life and prosperity?  Should some have the power to distribute this fundamental resource?  Are some resources such as food and water fundamentally different than others in terms of redistribution and power?

There is also an interesting message here about how we should view the “wells” God has given us.  In our time and culture the “wells” we control might look like a second home, a BMW, an expensive house, stocks, IRAs, etc.  I think God wants us to hold these things with an open hand — cede control of these things to God. That does not mean I believe in, or support, government-driven redistribution of wealth. Forced redistribution does not allow God to change our hearts and minds.  The process and how we get there is as important as the end result. Where this line of reasoning gets more complicated and muddy is for resources such as water, food, and access to healthcare.  Some form of redistribution of these resources seems warranted.

Prayer: God help me to place the things in my life in proper perspective and to cede control of them to you.