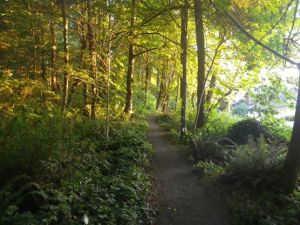 Then the LORD said to Moses, “Tell the Israelites to turn back and encamp near Pi Hahiroth, between Migdol and the sea. They are to encamp by the sea, directly opposite Baal Zephon. Pharaoh will think, ‘The Israelites are wandering around the land in confusion, hemmed in by the desert.’ And I will harden Pharaoh’s heart, and he will pursue them. But I will gain glory for myself through Pharaoh and all his army, and the Egyptians will know that I am the LORD.” So the Israelites did this. When the king of Egypt was told that the people had fled, Pharaoh and his officials changed their minds about them and said, “What have we done? We have let the Israelites go and have lost their services!” So he had his chariot made ready and took his army with him. He took six hundred of the best chariots, along with all the other chariots of Egypt, with officers over all of them. The LORD hardened the heart of Pharaoh king of Egypt, so that he pursued the Israelites, who were marching out boldly. The Egyptians—all Pharaoh’s horses and chariots, horsemen and troops—pursued the Israelites and overtook them as they camped by the sea near Pi Hahiroth, opposite Baal Zephon. As Pharaoh approached, the Israelites looked up, and there were the Egyptians, marching after them. They were terrified and cried out to the LORD. They said to Moses, “Was it because there were no graves in Egypt that you brought us to the desert to die? What have you done to us by bringing us out of Egypt? Didn’t we say to you in Egypt, ‘Leave us alone; let us serve the Egyptians’? It would have been better for us to serve the Egyptians than to die in the desert!” – Exodus 14:1-12

This is the lead up to one of the best know stories in the bible…the parting of the red sea by Moses. I did some investigation into this area with a geologist’s/geomorphologist’s eyes. I noticed several interesting things that I have never noticed before about this geographic area. The place they camped sounds like it was near the modern city of Sharm El Sheikh, part of Egypt. The Red Sea at this location is actually pretty shallow compared to the sea on either side of the narrow channel near where the Gulf of Aqaba empties into the Red Sea. Based solely on Google earth sea depths the deepest part of the channel is about 27 meters and some are as shallow as 7 meters. 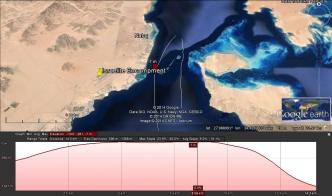 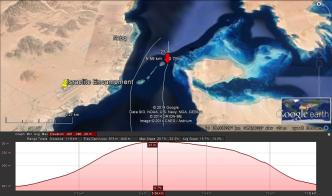 This may seem like a lot, but sea level during the last ice age was more than 120 meters lower! Based on the sea level rise curve sea level could have been anywhere between 10-30 meters lower in this area during the time the Israelites were fleeing Egypt. This would result in a very shallow crossing which could actually be “dried up” by shifting winds and water in the Gulf of Aqaba (more on this in the next post when Moses does the deed).
How often do we choose to “serve the Egyptians” rather than “die in the desert”. God sometimes calls us to be in places that seem to us to be devoid of water and life, places that are hard and prickly. He sometimes call us to befriend people who are hard, dry, and prickly. We have a choice to remain in these hard places or give up and “serve the Egyptians”. “Serving the egyptians” is certainly the easier path than wandering around in a desert. What does it look like to “Serve the Egyptians” for us? I think that it probably looks different for each one of us. Only God knows (and I suspect we also know deep down) where our Egypt lies and who the Egyptians are in our lives. Only by daily giving up this desire to stay stuck in “Egypt” to “serve the Egyptians” can we have victory.

In our spiritual lives “serving the Egyptians” means placing other things and people before God and doing what they want us to do rather than what God needs us to do. It seems that sometimes the known commodity of hardship and servitude is preferable to the unknown and possibly dangerous path that God calls us to walk. Jesus certainly provides us an example of how the “hard path” can sometimes be the right one through the lens of eternity.

Prayer: God help me to choose the path that you need me to walk rather than the path of least resistance, even if that path leads me to hard places.