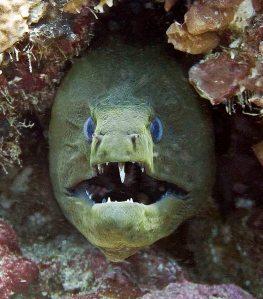 I have been pondering this verse for a while now and it seems like the things in the seas and streams that do not have scales would be things like lampreys and eels.  I must admit to not having much of a place in my heart for lamprey.  They have been referred to as the “vampires of the deep”.  They are a very big problem in the Great Lakes.

They were introduced to the Great Lakes when the canals were built so that ships could traverse between the lakes. Every year they have to use gallons and gallons of toxic lampricide to kill the young lamprey to keep their population under control.

So what does God have against us eating eels and other critters that lack scales and fins?  Not that I am keen on eating an eel or a lamprey mind you.  I can think of a couple of reasons for this type of prohibition.  Perhaps there were reasons why it was safer not to eat critters that lacked scales and fins.  I can still vividly remember a scene from the movie “the Deep” when a Moray Eel takes out a bad guy by chomping on his head (I know some of the guys reading this were thinking about the scene when Jacqueline Bisset climbs out of the water into the boat, but that will have to be the subject of another post).  Moray eels biting people’s heads is probably not what God was trying to prevent with his rule about fins and scales, but you never know.  There may also have been specific species of eels that were toxic in the red sea, for example, sea snakes…I hate snakes.

It seems like the deeper meaning here is that there are things, and behaviours, we will encounter in our lives there that are potentially bad or dangerous for us.  This could be foods we might eat or destructive habits and behaviors.  We can view this sort of “advice” from God as a set of rules that restrict our freedom or we can view them as a means to prevent getting “chomped in the head”…our choice.

Prayer: God help me to see your guidance as a means to make my life easier rather than a series of rules to follow.