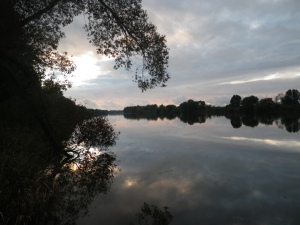 The Lord will open the heavens, the storehouse of his bounty, to send rain on your land in season and to bless all the work of your hands. You will lend to many nations but will borrow from none. The Lord will make you the head, not the tail. If you pay attention to the commands of the Lord your God that I give you this day and carefully follow them, you will always be at the top, never at the bottom. Do not turn aside from any of the commands I give you today, to the right or to the left, following other gods and serving them. – Deuteronomy 28:12-14

Open the heavens…that sounds like a downpour to me. Then again this passage says that God will send rain on the land “in season” which implies that he will provide for us when we need Him. This is tricky in practice. Our tendency as independent, strong-willed, humans is to call out the rain makers to make it rain when we need it. What God is telling the Israelites here is something very different…they must lead by following. The only way the Israelites can effectively “be the head” is if they are following God.

What does it mean that God says he will make the Israelites the head rather than the tail? The head clearly implies leadership while the tail clearly implies well….other things. The economy being described here is actually opposite of the economy that Jesus described when he came. Jesus talked of the first being last and the last being first. So again in this passage we encounter a dissonance between the God who wants to make the Israelites the head and Jesus who wants to make them, and us, the tail. Which one is it? Clearly we need leaders who can lead. I think the key distinction here is we need leaders who can lead while they follow God. God basically says this when he tells the Israelites not to turn aside, but to follow the commands He has given them.

The story of David and Goliath provides a good example of leading while following (1 Samuel 17). David boldly enters the battle with a far superior warrior, from an earthly perspective. Indeed most of the army probably thought he was nuts going up against a huge warrior with nothing more than a sling. What the army could not see was that David saw God going ahead of him…David was leading while following.

Prayer: God teach me to lead while following You.