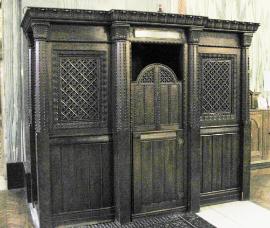 When they came to Geliloth near the Jordan in the land of Canaan, the Reubenites, the Gadites and the half-tribe of Manasseh built an imposing altar there by the Jordan. And when the Israelites heard that they had built the altar on the border of Canaan at Geliloth near the Jordan on the Israelite side, the whole assembly of Israel gathered at Shiloh to go to war against them.   So the Israelites sent Phinehas son of Eleazar, the priest, to the land of Gilead—to Reuben, Gad and the half-tribe of Manasseh. With him they sent ten of the chief men, one from each of the tribes of Israel, each the head of a family division among the Israelite clans.   When they went to Gilead—to Reuben, Gad and the half-tribe of Manasseh—they said to them: “The whole assembly of the Lord says: ‘How could you break faith with the God of Israel like this? How could you turn away from the Lord and build yourselves an altar in rebellion against him now? Was not the sin of Peor enough for us? Up to this very day we have not cleansed ourselves from that sin, even though a plague fell on the community of the Lord ! And are you now turning away from the Lord ? “ ‘If you rebel against the Lord today, tomorrow he will be angry with the whole community of Israel. If the land you possess is defiled, come over to the Lord ’s land, where the Lord ’s tabernacle stands, and share the land with us. But do not rebel against the Lord or against us by building an altar for yourselves, other than the altar of the Lord our God. When Achan son of Zerah was unfaithful in regard to the devoted things, did not wrath come on the whole community of Israel? He was not the only one who died for his sin. – Joshua 22:10-20

The Israelites are angry at the Reubenites and the Gadites for defiling the promised land with an altar meant to replace the one God had Joshua build.  They were trying to set up their own, more convenient, place to make offerings and atonement sacrifices.  Travelling all the way to the altar of Joshua was hard, dangerous,, and inconvenient.

How often do we as Christians try to replace God through more convenient, less spiritually dangerous, and easy traditions?  I am not Catholic, but I am reminded of the Catholic tradition of confessionals in churches where a priest serves as an intermediary to accept confessions, essentially replacing Jesus and allowing people to obtain forgiveness for sins through indirect actions instead of the raw love of God for us even when we sin against Him. This practice replaces the altar of redemption we have in a personal relationship with Jesus with a more convenient substitute.

The preceding chapters of Joshua provided detailed descriptions of the inheritance and land boundaries of the different Israelite tribes.  Many of these boundary markers were water features such as seas, rivers, springs, and wells.  It is interesting that some of the same features that God used to provide for the Israelites have now become merely property markers.  Do we take the blessings and provisions of God and demote them into mere markers that define the boundaries of our Christian communities?

For example, the divisions and denominations that have their roots in disagreements about how we choose to welcome a new believer into a life with Christ through baptism…sprinkle, dunk, or dedication?  How crazy is it that the very practice which is intended to identify a oneness in Christ has resulted in some Christians unable to worship and share God’s love with each other!

Prayer: God help us to reject substitutes for Your love and the forgiveness we have in Jesus.