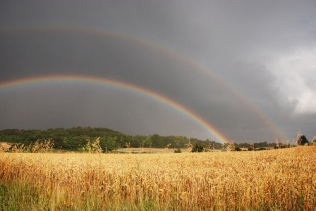 But when you saw that Nahash king of the Ammonites was moving against you, you said to me, ‘No, we want a king to rule over us’—even though the Lord your God was your king. Now here is the king you have chosen, the one you asked for; see, the Lord has set a king over you. If you fear the Lord and serve and obey him and do not rebel against his commands, and if both you and the king who reigns over you follow the Lord your God—good! But if you do not obey the Lord , and if you rebel against his commands, his hand will be against you, as it was against your ancestors.   “Now then, stand still and see this great thing the Lord is about to do before your eyes! Is it not wheat harvest now? I will call on the Lord to send thunder and rain. And you will realize what an evil thing you did in the eyes of the Lord when you asked for a king.”   Then Samuel called on the Lord , and that same day the Lord sent thunder and rain. So all the people stood in awe of the Lord and of Samuel.   The people all said to Samuel, “Pray to the Lord your God for your servants so that we will not die, for we have added to all our other sins the evil of asking for a king.”   “Do not be afraid,” Samuel replied. “You have done all this evil; yet do not turn away from the Lord , but serve the Lord with all your heart. Do not turn away after useless idols. They can do you no good, nor can they rescue you, because they are useless. For the sake of his great name the Lord will not reject his people, because the Lord was pleased to make you his own. As for me, far be it from me that I should sin against the Lord by failing to pray for you. And I will teach you the way that is good and right. But be sure to fear the Lord and serve him faithfully with all your heart; consider what great things he has done for you. Yet if you persist in doing evil, both you and your king will perish. – 1 Samuel 12:12-25

Samuel tells it like it is…”you said to me, ‘No, we want a king to rule over us’—even though the Lord your God was your king”.  Samuel recounts a few of the ways God was there for the Isrealites in the past…God was always the Israelite’s king and protector, they had just chosen to move away from Him to the point where God’s blessings were blurred.

Samuel is reminding the Israelites that both they and their new king need to faithfully follow God.  They have messed up by asking for a comfortable king to replace God, but Samuel is telling them that even now it can work out if they love and serve God with all their heart.

“stand still and see this great thing the Lord is about to do before your eyes”.  The water in this passage arrives in the form of rain (and thunder)…at wheat harvest time.  The timing at harvest time could be to make it clear that the rain was a miracle of God.  I am not a farmer, but I assume that harvest time for wheat is often hot and dry, which would make rain a more miraculous event.  It might also be a somewhat inconvenient event if it ruined the wheat harvest. Why would it be important that the rain and thunder show up at a time which might actually be inconvenient?

Perhaps there is a spiritual message here too.  What if part of the reason that God chose to demonsetrate His power in this way was to make it clear that the provision He provides comes on His terms not the Israelite’s terms.  Ever since the slavery in Egypt the Israelite’s problem with faithfully following God has been that they often expected something different than God provided.  In the desert God provided Manna that they did not like and bitter water that they could not drink.

I think Christians can suffer from the same problem.  Sometimes we miss God’s blessings because they arrive at a time, or in a form, that we do not expect.  We have to be looking and listening very carefully to be sure that we do not miss a rain at harvest time.

Prayer: God help us to faithfully follow you without the need for miracles to help us remember your love for us.