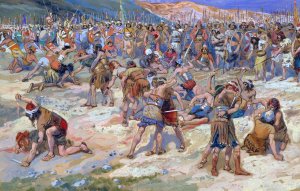 Meanwhile, Abner son of Ner, the commander of Saul’s army, had taken Ish-Bosheth son of Saul and brought him over to Mahanaim. He made him king over Gilead, Ashuri and Jezreel, and also over Ephraim, Benjamin and all Israel.   Ish-Bosheth son of Saul was forty years old when he became king over Israel, and he reigned two years. The tribe of Judah, however, remained loyal to David. The length of time David was king in Hebron over Judah was seven years and six months.   Abner son of Ner, together with the men of Ish-Bosheth son of Saul, left Mahanaim and went to Gibeon. Joab son of Zeruiah and David’s men went out and met them at the pool of Gibeon. One group sat down on one side of the pool and one group on the other side.   Then Abner said to Joab, “Let’s have some of the young men get up and fight hand to hand in front of us.” “All right, let them do it,” Joab said.   So they stood up and were counted off—twelve men for Benjamin and Ish-Bosheth son of Saul, and twelve for David. Then each man grabbed his opponent by the head and thrust his dagger into his opponent’s side, and they fell down together. So that place in Gibeon was called Helkath Hazzurim.    The battle that day was very fierce, and Abner and the Israelites were defeated by David’s men.   The three sons of Zeruiah were there: Joab, Abishai and Asahel. Now Asahel was as fleet-footed as a wild gazelle. He chased Abner, turning neither to the right nor to the left as he pursued him. Abner looked behind him and asked, “Is that you, Asahel?” “It is,” he answered.   Then Abner said to him, “Turn aside to the right or to the left; take on one of the young men and strip him of his weapons.” But Asahel would not stop chasing him.   Again Abner warned Asahel, “Stop chasing me! Why should I strike you down? How could I look your brother Joab in the face?”   But Asahel refused to give up the pursuit; so Abner thrust the butt of his spear into Asahel’s stomach, and the spear came out through his back. He fell there and died on the spot. And every man stopped when he came to the place where Asahel had fallen and died.   But Joab and Abishai pursued Abner, and as the sun was setting, they came to the hill of Ammah, near Giah on the way to the wasteland of Gibeon. Then the men of Benjamin rallied behind Abner. They formed themselves into a group and took their stand on top of a hill.   Abner called out to Joab, “Must the sword devour forever? Don’t you realize that this will end in bitterness? How long before you order your men to stop pursuing their fellow Israelites? – 2 Samuel 2:8-26

Apparently Abner did not get the memo that David was chosen by God to be the next king of Israel. This passage describes part of the power struggle after Saul and Jonathan were killed. Another of Saul’s sons, Ish-Bosheth, is being put forward by Abner as the rightful king. God has other plans. Israelite clans are fighting and killing one another. They seem to be chasing after each other rather than chasing after God. 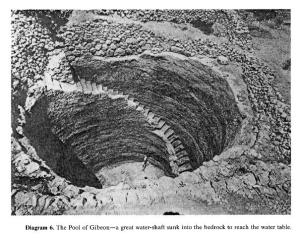 The meeting at the pool of Gibeon is an odd scene. It is not clear what this pool was like but there are those who think it was a deep excavation into limestone to access a spring.  Two opposing groups of men, with deadly intent, are sitting across a pool of water from each other. This in itself is strange, but it gets even stranger when they each pick 12 warriors and they proceed to essentially commit group suicide. It sounds like a sacrifice rather than a battle. They name the place Helkath Hazzurim ( the field of the sharp knives). I confess I am at a loss to understand what is going on here. I have heard of battles being decided by single combat — like when David used his smooth stones to take out Goliath. This mass suicide does not even seem to decide anything. It seems like a senseless sacrifice. The battle continues despite the demise of twenty-four unlucky warriors.

As I chew on this passage it occurs to me that some of the “going to war over land” that goes on within our Christian communities can result in senseless sacrifices too. Let me explain, as Inigo Montoya from Princes Bride would say, “No, there is too much. Let me sum up.” Conflicts within the church over things like worship style, music, baptism, steeples, and other issues often result in divisions and splits in the body of Christ.  In many cases, this seems almost as senseless as the synchronized stabbing at the pool of Gibeon.  The end result is similar also.  It often does not really resolve the conflict. The conflict just spreads out like it did in this passage.  People move on to another church and take with them the unresolved issues that generated the division in the first place.  Unresolved conflict can become like cancer in the body of Christ.

Normal cell division in a body we call growth — abnormal cell division without purpose we call cancer. Cancer is a hideous disease. It takes over the very machinery of a cell to reproduce and eventually destroys the body…sounds eerily familiar doesn’t it. How often do divisions within the church arise from the very structures that are meant to prompt unity and growth? For example, the practice of baptism. This act is meant to signify a joining together of a family of believers. How crazy is it that disagreement over how this is done actually divides some Christians!

If Jesus were to show up today I think He would be horrified and bewildered by the ways we have allowed our differences to divide us. Just like the Israelites in this passage formed into clans to chase one another across the countryside. We allow our churches to divide into “1st”, “2nd”, and “3rd” without even mourning the loss.

Prayer: God help us to view division as a disease which is fatal for some souls. Help us to battle against it rather than each other.