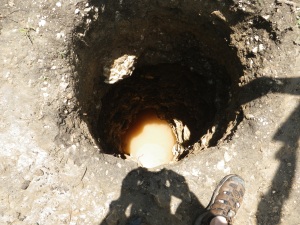 During harvest time, three of the thirty chief warriors came down to David at the cave of Adullam, while a band of Philistines was encamped in the Valley of Rephaim. At that time David was in the stronghold, and the Philistine garrison was at Bethlehem. David longed for water and said, “Oh, that someone would get me a drink of water from the well near the gate of Bethlehem!” So the three mighty warriors broke through the Philistine lines, drew water from the well near the gate of Bethlehem and carried it back to David. But he refused to drink it; instead, he poured it out before the Lord . “Far be it from me, Lord , to do this!” he said. “Is it not the blood of men who went at the risk of their lives?” And David would not drink it. Such were the exploits of the three mighty warriors. – 2 Samuel 23:13-17

Okay so I’m a little confused here. I thought David’s last words would be…well David’s last words. This short passage seems to be tacked on to the end of David’s life. It doesn’t really seem to fit with the rest of the verses that come just before it.

There are a group of 30 or so warriors who have pledged to protect David and care for him in his old age. It sounds like David is not in his palace in Jerusalem but rather hold up in a cave.  He’s thirsty and wants something to drink.  He wants not just any water but water from a well on the outskirts of Bethlehem. This presents a bit of a problem since the Philistines control Bethlehem at the moment.  Three of the 30 warriors decide that they will brave a journey to Bethlehem to get water from the well to bring back for David.

If someone is going to risk life and limb to get water for you it seems like one might want to drink it…but that is not what David does.  He does something a little strange.  He pours the water out because he doesn’t like the idea of these men risking their lives, and blood, to get it.  The scene is a bit reminiscent of previous cases of pouring out.  I must admit that I’m not entirely sure I understand what’s going on here.

I suppose it is possible that David is feeling guilty that he has not been the best faithful follower of God. Perhaps he thinks by pouring out the water provided by the warriors he is doing something like making a sacrifice — here at the end of his life.

I wonder if somewhere, deep in his heart and mind, David feels like he has squandered something important that God gave him as the anointed king of Israel.  In a sense these men did what David was supposed to be doing for Israel — going to the “well” to fetch water (which was God) and delivering it back to the people.  Somewhere along the way David got lost and wasn’t able to be that person.

It is very easy to become distracted and caught up with the cares of the day and fail to remember the one who rules each day.  This blog continues to challenge and teach me each day.  Some days it feels like a wrestling match, and other days it feels more like a minuet where God and I are in sync — either way God always wins.

Prayer: God help me to maintain a focus on the things you need me to do today.