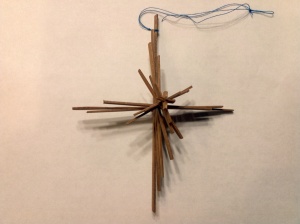 Western Red Cedar Star I made in college

When Hiram king of Tyre heard that Solomon had been anointed king to succeed his father David, he sent his envoys to Solomon, because he had always been on friendly terms with David. Solomon sent back this message to Hiram: “You know that because of the wars waged against my father David from all sides, he could not build a temple for the Name of the Lord his God until the Lord put his enemies under his feet. But now the Lord my God has given me rest on every side, and there is no adversary or disaster. I intend, therefore, to build a temple for the Name of the Lord my God, as the Lord told my father David, when he said, ‘Your son whom I will put on the throne in your place will build the temple for my Name.  So give orders that cedars of Lebanon be cut for me. My men will work with yours, and I will pay you for your men whatever wages you set. You know that we have no one so skilled in felling timber as the Sidonians.”   When Hiram heard Solomon’s message, he was greatly pleased and said, “Praise be to the Lord today, for he has given David a wise son to rule over this great nation.”   So Hiram sent word to Solomon: “I have received the message you sent me and will do all you want in providing the cedar and juniper logs. My men will haul them down from Lebanon to the Mediterranean Sea, and I will float them as rafts by sea to the place you specify. There I will separate them and you can take them away. And you are to grant my wish by providing food for my royal household.” – 1 Kings 5:1-9

Solomon has taken over the reigns of ruling the Israelites.  He is in the process of trying navigate alliances and relationships forged by his father King David.  Hiram, a king in a nearby kingdom, is attempting to build a new relationship with Solomon by collaborating on the building of a new temple in Jerusalem.

I find it interesting that Solomon’s first priority as king is to rebuild the temple and a place for the Ark of the Covenant.  He explained that David could not do this because he was too busy being chased and chasing those around him.  I suspect part of the reason was also the “stuck” position that David felt he was in due to past decisions.

Solomon shows wisdom in knowing what his men were skilled at and what tasks he should entrust to others. He enlists the help of Sidonian woodworkers to obtain the cedars for the temple.  It turns out that Solomon builds the entire temple mostly out of wood instead of stone.  the foundation is stone, but the everything on the inside is wood.  I am not sure why this is.  Perhaps he wants to establish that his rule and kingdom will be different than David’s.  Building the temple first and then going about the task of ruling – with wisdom.

Cedar is one of my favorite woods.  Where I grew up in Western Washington we had a cedar variety called Western Red Cedar.  These trees grow very tall and have droopy branches that look a bit like arms reaching up toward heaven.  One of the reasons I like cedar is that it is very soft and workable.  It splits easily along the grain and even a novice craftsman like myself can make cool things.

I think Solomon is already showing that he is somewhat more “workable” than David was when he was King.  Solomon is using wisdom rather than war.  Wisdom is an interesting concept. It is different than intelligence. I think if we are honest we have all known people who are very intelligent but not very wise. What is the difference between wisdom and intelligence? I think the fundamental difference lies in the ability to place knowledge and experience in a context that gives it meaning.  Wisdom connects facts and “factions” to develop workable solutions.

Water comes into this passage as a vehicle for floating the cedars to Jerusalem on the Mediterranean sea.  This would have been a much easier means of transporting these very heavy trees whose density allowed them to float on water.  The trees were essentially “walking on water”.

Prayer: God give us wisdom to weigh our actions and the actions of those around us.