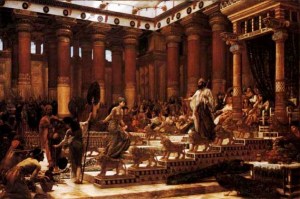 Then the king made a great throne covered with ivory and overlaid with fine gold.  The throne had six steps, and its back had a rounded top. On both sides of the seat were armrests, with a lion standing beside each of them. Twelve lions stood on the six steps, one at either end of each step. Nothing like it had ever been made for any other kingdom.  All King Solomon’s goblets were gold, and all the household articles in the Palace of the Forest of Lebanon were pure gold. Nothing was made of silver, because silver was considered of little value in Solomon’s days.  The king had a fleet of trading ships at sea along with the ships of Hiram. Once every three years it returned, carrying gold, silver and ivory, and apes and baboons.  King Solomon was greater in riches and wisdom than all the other kings of the earth. The whole world sought audience with Solomon to hear the wisdom God had put in his heart. Year after year, everyone who came brought a gift—articles of silver and gold, robes, weapons and spices, and horses and mules. – 1 Kings 10:18-25

Okay, I have to admit I don’t get the apes and baboons thing. I suppose Solomon may have wanted apes and baboons to be exotic or perhaps to highlight his wealth and trading abilities.  It sounds like Solomon has set up a complex trading network which was quite advanced and well-established for the time.

Solomon does not do anything halfway, he goes big with his throne, the temple, and the palace.  It seems like Solomon is very comfortable in his wisdom and wealth.   Sometimes when we get comfortable we stop thinking and pursuing God.  There is little evidence, other than the public dedications, that Solomon’s life is dedicated to God.

Solomon also seems to be taking his affluence  and influence to extremes.  His palace is ornate and uses only gold goblets.   Material wealth can be a blessing and a curse.  It all depends on one’s posture and perspective toward the earthly things that God has entrusted us with, and the ability of those things to prevent us from faithfully following God.

Solomon’s father David took Uriah’s wife, the wreckage and collateral damage of this choice transformed David’s life.  We will find out soon, in a subsequent passage, that Solomon has taken 700 wives from royal households and has 300 concubines.  This choice will also lead to many problems with idols and falling away from God.

Solomon excels at being an earthly leader, but he fails the “Meribah Test“.  His priorities and choices will lead the Israelites far away from God for generations of leaders.  It will take many prophets and attempts to get them to turn back to God.

Prayer: God help us to keep our material wealth in perspective.