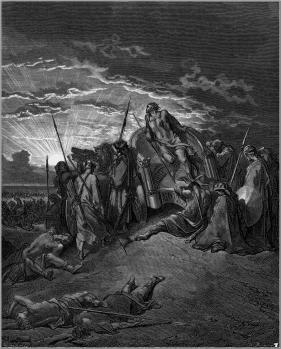 There are many aspects of this passage that are strange…” funny water” if you will. The current king of Israel (the northern kingdom) Ahab wants to retake some territory called Ramoth Gilead. He is trying to enlist the king of Judea, ( the southern kingdom) Jehoshaphat…apparently he is the origin of the expression “jumping Jehoshaphat”. According to some accounts Jehoshaphat was influenced by powerful advisors who made him jump through “hoops” according to their own schemes. Ahab is doing much the same here, convincing Jehoshaphat to “jump” into a battle with the king of Aram.

In general, Jehoshaphat has been a good king trying to reverse some of the idol worship started under king Solomon. Ahab and the southern kingdom are still running from God despite God’s efforts through Elijah. Ahab has invited Micaiah, a prophet of God, to tell him whether his efforts to take Ramoth Gilead will be successful. Ahab does not like the answer he gets… Micaiah predicts failure and death for Ahab. King Ahab has Micaiah sent home and imprisoned with nothing but bread and water for his honest prophecy.

Here is where it gets weird. Ahab and Jehoshaphat go into battle at Ramoth Gilead, but King Ahab goes into battle in disguise…incognito. It seems Ahab is either trying to get Jehoshaphat killed, or at a minimum he realizes that the King of Israel would be a target for the Arameans they were attacking and wanted to avoid being killed himself. The king of Aram had directed his charioteers to do just that…take out the king of Israel, but they were having trouble because of his disguise. This hardly seems like an honorable way for the king of Israel to behave.

A random arrow pierces Ahab’s armor and he bleeds to death while watching his army and Jehoshaphat’s army fight his battle for him. His blood fills his chariot and his lifeless body is taken to Samaria, the very same place where he stole the land of a man named Naboth and his wife Jezebel had Naboth stoned to death.  In Samaria they washed his chariot with water where his blood mingled with water to be licked up by dogs….fulfilling the prophesy about the manner of his death made by Elijah (1 Kings 21:19).

On one level Ahab’s death was a consequence of his unjust stoning and robbery of Naboth (carried out by his wife Jezebel), but it was also a consequence of his failure to receive the rain God offered to end the physical and spiritual drought that Israel was experiencing. God gave Ahab a chance to return to Him and faithful following… he chose poorly.

We also are given a choice each time we choose whether to continue in our faithful following or to turn to other gods in our lives. Our consequences may not be as immediate or graphic as bleeding to death in a chariot, but we may loose out on things God has for us, just like Ahab missed out on what God had for him if he had chosen differently.

Prayer: God help us to choose wisely when given a choice whether we faithfully follow you or turn to other gods in our lives.