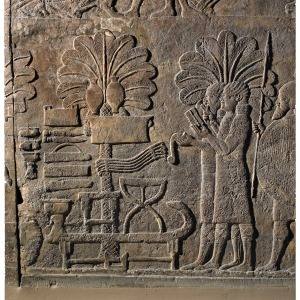 Then Isaiah son of Amoz sent a message to Hezekiah: “This is what the Lord , the God of Israel, says: I have heard your prayer concerning Sennacherib king of Assyria. This is the word that the Lord has spoken against him: “ ‘Virgin Daughter Zion despises you and mocks you. Daughter Jerusalem tosses her head as you flee.   Who is it you have ridiculed and blasphemed? Against whom have you raised your voice and lifted your eyes in pride? Against the Holy One of Israel!   By your messengers you have ridiculed the Lord. And you have said, “With my many chariots I have ascended the heights of the mountains, the utmost heights of Lebanon. I have cut down its tallest cedars, the choicest of its junipers. I have reached its remotest parts, the finest of its forests.   I have dug wells in foreign lands and drunk the water there. With the soles of my feet I have dried up all the streams of Egypt. – 2 Kings 19:20-24

This passage is a response from God to the prayer of Hezekiah, as shared through the prophet Isaiah the son of Amoz.  Isaiah is sharing God’s response to Sennacherib, king of Assyria, who has been abusing and deporting the Israelites.  He has also been tempting them to turn away from God and Hezekiah.

God is describing the destructive work of the king of Assyria.  It is quite an indictment, he has: 1) ridiculed the Lord; 2) cut down the choicest cedars and junipers; 3) reached the remotest parts of the kingdom with destruction; 4)  dug wells and drunk the waters; 5) dried up all the streams of Egypt with his feet.

This is such a strange and specific list that it seems God is trying to communicate deeper meaning through this discourse.  So what could it mean?  Let’s take these items one at a time and see if we can wring some spiritual meaning from them.

The first is not really metaphorical, but functional.  The Assyrian king, and his messengers, openly mocked both God and those who followed him.  They in essence said that following God was choosing death and following the king of Assyria was full of good things.

The second item on the list is somewhat odd.  Why would cutting down the trees be such a big deal unless these tree were meant to represent something else.  I wonder if the trees represent the well-rooted traditions and beliefs of the Israelites that the king of Assyria wanted to fell and turn into “buildings”  in his own land.

The third item may be just a statement about the extent to which the false truths and lies have infiltrated the “furthest reaches” and deepest depths of the Israelite’s souls.  The king and his messengers are trying to foment doubt about God’s existence and ability to protect the people of Israel.  This deception is apparently widespread in terms of geography, number of people affected, and depth of spiritual deception.

The fourth item is where we actually get to the water reference in this passage.  This one is more subtle.  If we agree that water in the desert is life,and the Israelites are essentially desert people, then the Assyrian King digging wells and drinking the water may mean he was stealing the inheritance that God had promised the Israelites.  He was also trying to replace the reliance on God with a reliance on himself…digging his own wells rather than relying on the great cistern.

The last indictment is in some ways the strangest and most confusing to me.  It also involves water.  God is saying that the Assyrian king is boasting of drying up streams with the soles (perhaps it should read souls) of his feet.  I guess in an odd way this is like a destructive version of walking on water.  Everywhere the Assyrian king steps he is “drying up” the spiritual living water that God is trying to provide the Israelites — rain on a dry and dusty land.

Prayer: God help us to rely upon You for our water and food and resist those who would try to replace You in our lives.