Take Courage and Do It! 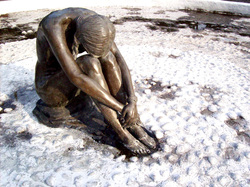 While Ezra was praying and confessing, weeping and throwing himself down before the house of God, a large crowd of Israelites—men, women and children—gathered around him. They too wept bitterly. Then Shekaniah son of Jehiel, one of the descendants of Elam, said to Ezra, “We have been unfaithful to our God by marrying foreign women from the peoples around us. But in spite of this, there is still hope for Israel. Now let us make a covenant before our God to send away all these women and their children, in accordance with the counsel of my lord and of those who fear the commands of our God. Let it be done according to the Law. Rise up; this matter is in your hands. We will support you, so take courage and do it.”   So Ezra rose up and put the leading priests and Levites and all Israel under oath to do what had been suggested. And they took the oath. Then Ezra withdrew from before the house of God and went to the room of Jehohanan son of Eliashib. While he was there, he ate no food and drank no water, because he continued to mourn over the unfaithfulness of the exiles. – Ezra 10:1-6

Welcome to Jerusalem Ezra! Ezra’s first task when he arrives in Jerusalem is rather hard…he has to tell many of the exiles that they have broken God’s commandment and must give up their wife and kids. This could not have been an easy or popular message to deliver. This would be a bit like someone walking into a modern church and telling everyone who was divorced that they have broken God’s law and they must give up their new wife and kids. I can see why everyone was weeping bitterly.

Ezra’s withdrawal to a room to take no food or water is also an interesting detail — sort of a holy hunger strike. Was this to convince the people that he was asking to make hard choices that he was also making a hard choice, i.e. not to eat or drink until the matter was resolved?

I wonder how people would respond today if someone went on a hunger strike to restore the “purity” of the church. I suspect the person might quickly be asked to find a new church somewhere else. That is not the way the Israelites responded…they told Ezra to be bold…they would support him…”take courage and do it”.  They gave Ezra permission to hold them accountable.

I have witnessed the breaking apart of more than one family at the churches I have attended. I confess that it was hard for me to talk to these families, much less call on them to repent and undo their divorce and remarriage.  This is a hard teaching in this passage.  I think our society has become self conscious about confrontation.  I am guilty of taking the chicken chute sometimes when boldness and courage are required.

So how can we discern the difference between participating in God-inspired accountability when people are on a destructive path, and self-centered judgement of others?  Aye there’s the rub…the tension…which can both tear us apart and make us stronger.  Ultimately Ezra needed the permission of those he was leading to hold them accountable.  If we desire accountability we must give others in our lives, and God, permission to hold us accountable.

God has given us great freedom to make our own choices, even to be free of God if we choose.  With this great freedom comes great responsibility…or in the words of that great philosopher Spider-man…”with great power comes great responsibility”.  The Israelites have given up some of their freedom to marry who they wish because they want God more than they want their own freedom…food for thought.

Prayer: God with the freedom You have given us comes great responsibility.  Help us to identify people in our lives who we can hold us accountable for our choices.

3 Responses to Take Courage and Do It!