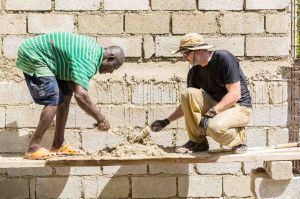 Stone by stone, person by person, family my family Nehemiah and God are helping the Israelites rebuild the City of David.  I am pretty sure God had in mind more than just the rebuilding of a wall. I think he was in the process of rebuilding his relationship with the Israelites — stone by stone, person by person, family by family.  God knew that families working together toward a common purpose would make stronger families and a stronger relationship with Him.

I don’t have a lot of experience building walls…in fact the only time I can remember building a wall was a couple of years ago when I went with a group from our church to Haiti to help build homes for people that were left homeless after the 2010 earthquake.  We spent about a week working together, side by side, with Haitians to pour concrete columns and build walls for a home.  We, like the Israelites, were building more than concrete columns and cinder block walls — we were building relationships with the Haitians.

I had the good fortune to work with a stone mason named Kalebuda, who was directing the building of the walls.  I effectively became his apprentice after a few days, learning everything I could about building walls and pouring concrete columns.  Kalebuda clearly had a good reputation among the other young men and workers.  He knew what he was doing and he was a master of making much with little.  He reused almost every nail and scrap of wood.  I had much to learn from him both about building walls and living life.

I remember one day we were finishing a wall and we were pouring a concrete column near the corner of the building.  We were standing on a sketchy platform made of cinder blocks and pieces of wood.  I had the job of pouring the concrete down the wooden mold for the column.  This meant balancing precariously above the column trying not to lacerate my arm on the neighbor’s razor wire while pouring 50-pound buckets of concrete down the form.

This was difficult enough, but then it started to rain…not a light rain but a very hard rain one gets in the tropics in the afternoon.  I can remember Kalebuda the mason and I looking at each other in the soaking rain with great disappointment knowing that we were not going to be able to finish the wall we were building that day.

Part of rebuilding the wall in Jerusalem was also rebuilding the water storage features which were crucial to survival in this desert environment.  This included the Pool of Siloam and the “artificial pool” near the tombs of David.  When a city like Jerusalem is under siege water storage can mean life or death.    These water reservoirs are, in a way, analogous to the relationship and spiritual rebuilding that was accompanying the wall construction.  The people of Israel will need reservoirs of relationship with God to weather some of the trials to come.

Prayer: God may our strength come from our relationship with you rather than the strength of our “walls”.

2 Responses to Stone by Stone