The Hammer and the Sword 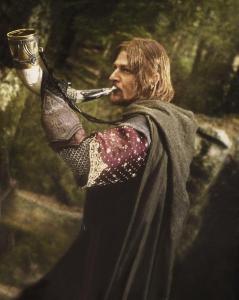 From that day on, half of my men did the work, while the other half were equipped with spears, shields, bows and armor. The officers posted themselves behind all the people of Judah who were building the wall. Those who carried materials did their work with one hand and held a weapon in the other, and each of the builders wore his sword at his side as he worked. But the man who sounded the trumpet stayed with me.   Then I said to the nobles, the officials and the rest of the people, “The work is extensive and spread out, and we are widely separated from each other along the wall. Wherever you hear the sound of the trumpet, join us there. Our God will fight for us!”   So we continued the work with half the men holding spears, from the first light of dawn till the stars came out. At that time I also said to the people, “Have every man and his helper stay inside Jerusalem at night, so they can serve us as guards by night and as workers by day.” Neither I nor my brothers nor my men nor the guards with me took off our clothes; each had his weapon, even when he went for water. – Nehemiah 4:16-23

Well the rebuilding of the walls of Jerusalem has ruffled some feathers among the neighboring rulers and they have begun to taunt and make it more difficult for the Israelites to go about their work of building strong walls stone by stone and family by family.  The Israelites respond by calling up reinforcements and post armed defenders while they work to rebuild the walls.  They even have to have guards when they go for water.

They have to divide their time between building and guarding, and they have to carry both a hammer and a sword.  An early warning system consisting of a trumpet is implemented to call people to the aid of any section of the wall that is under attack.

I am a big Lord of the Rings fan and this reminds me of a scene in the second movie in the Lord of the Rings, The Two Towers. Boromir uses the horn of Gondor to call legolas and Aragorn to his aid.  He is under attack by many Uruk-hai (half man and half Orc) and he is trying his best to protect two of the hobbits, Pippin and Merry.  Aid does come for Boromir, but not until he is pierced by many Uruk-hai arrows. Aragorn and Legolas are discouraged and heartbroken at the loss of Boromir.

Christians are also in the process of building a relationship with God.  Just like the Israelites Christians can encounter resistance and distraction that can slow down the building process.  Now I am not saying that we need to carry swords, but we should be aware that there are people and influences in our lives that can distract us from the “building process”.  The dynamic of this distraction is presented in a fictional classic by C.S. Lewis called the Screwtape Letters.  This book describes the complex spiritual landscape that surrounds us as we go about our lives and how the battle for our souls plays out.

God knows that we are not always skilled at the building He calls us to do and He provides what we need when we need it.  We can also call out to Him whenever we feel that we need help — blow the trumpet if you will — and He will answer.

Prayer: God as we go about the task of building a relationship with You guard our hearts and souls from those who would sabotage our work.