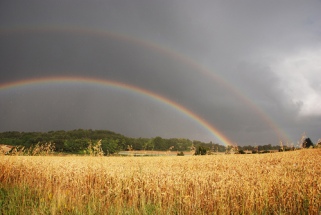 But if I were you, I would appeal to God; I would lay my cause before him.   He performs wonders that cannot be fathomed, miracles that cannot be counted.   He provides rain for the earth; he sends water on the countryside.   The lowly he sets on high, and those who mourn are lifted to safety.   He thwarts the plans of the crafty, so that their hands achieve no success.   He catches the wise in their craftiness, and the schemes of the wily are swept away.   Darkness comes upon them in the daytime; at noon they grope as in the night.   He saves the needy from the sword in their mouth; he saves them from the clutches of the powerful.   So the poor have hope, and injustice shuts its mouth. – Job 5:8-16

And so begins the “consoling” by Job’s friends.  In this passage Eliphaz the Temanite is responding to Job’s lament about the condition he finds himself in.  The pattern of Job is an ongoing dialogue between Job, who has been afflicted with sores, and his friends who, though well meaning, cannot see into Job’s soul.

Job has just cursed the day he was born and he does not want to live anymore.  He feels like he is in the shadow of a great and all encompassing cloud.  Eliphaz’s response is to tell him to appeal to God.  We are not told much about Job’s friends, but they do seem pretty quick to step in and try to solve Job’s problems.

I must admit that is typically my first instinct..to step in and start trying to solve problems.  This does not usually work out well and it does not work out so well for Job and his friends.  It seems they are talking to one another but there is not so much genuine communication going on.

The language that Eliphaz is using seems somewhat impersonal, insensitive, and distant.  Instead of reassuring Job with accounts of a God who carries him like a son or daughter or provides rain on “tender plants”, Eliphaz speaks of  “rain for the earth”…and “water on the countryside”.  This feels like someone resorting to “religiosity” over “relationship”.

I have encountered Christians in my walk who did something similar to what Eliphaz is doing and I am sure I have done it as well.  Why is it easier to resort to comfortable aphorisms?  I think it is because we often feel the need to speak even when we do not know what to say.  As I get older and wiser I am learning that there are times when we are called to say nothing.

2 Responses to Religiosity over Relationship