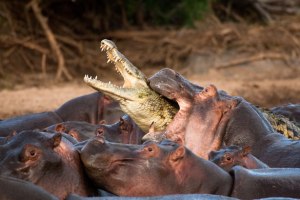 Look at Behemoth, which I made along with you and which feeds on grass like an ox.   What strength it has in its loins, what power in the muscles of its belly!   Its tail sways like a cedar; the sinews of its thighs are close-knit.   Its bones are tubes of bronze, its limbs like rods of iron.   It ranks first among the works of God, yet its Maker can approach it with his sword.   The hills bring it their produce, and all the wild animals play nearby.   Under the lotus plants it lies, hidden among the reeds in the marsh.   The lotuses conceal it in their shadow; the poplars by the stream surround it.   A raging river does not alarm it; it is secure, though the Jordan should surge against its mouth.   Can anyone capture it by the eyes, or trap it and pierce its nose? – Job 40:15-24

Ah we now arrive at a tricky bit of water. This is a much debated passage. It is often used by those who believe that the earth is young to somehow force all the rich geologic history of the earth into the narrative provided in the bible. They feel  the need to merge the human history recounted in the bible with the earth history that the rocks record of a time long before humans walked the earth. The history of earth includes many events not described in the bible. Does this mean that the bible is therefore somehow unreliable or inaccurate, or alternatively does it mean that those who study earth history like myself are wrong? I do not believe so on both counts.

The bible is mostly about relationships between people and between God and people. The bible also provides valuable insight into the spiritual dimension of the world and our own souls. When natural events like floods and storms intersect with things going on between man and God these events are described. I do not think the bible was ever intended to be read as a text for understanding earth history any more than a geology textbook is intended to teach us about human interactions and spiritual truths.

So let us return to this passage from Job. The term behemoth and the description that follows has been cited by some as a description of a dinosaur and thus proof that man and dinosaurs coexisted. This is then used to support a belief that the earth was created roughly 6,900 years ago. Those who espouse this belief are termed young earthers. As a geologist and scientist I believe the geologic evidence is clear and unambiguous the earth is much older than 6,900 years. There is no geologic evidence that humans, or even humanoid creatures, existed during the time of the dinosaurs. There are many commentaries that explore this passage and the meaning of it’s various parts so I will not cover this stretch of water again.

So where does that leave us? God is describing a water dwelling creature that is a vegetarian and has very strong loins and big legs…could be a hippopotamus…I honestly do not know. My interpretation and understanding of this passage does not change my faith or belief in God. I am more concerned about learning about the God who loves me deeply, and who wants to carry me like a son or daughter, than I am learning about whether the behemoth in this passage was an elephant, hippopotamus, or something else entirely. If I get distracted from pursuing and knowing knowing God by a passage like this then perhaps I am just “counting clouds“.

Prayer: God you have created a complicated and beautiful planet. Help me to learn about both the hands and heart that formed it and the amazing processes that continue to shape and form it.