The Flock Under his Care 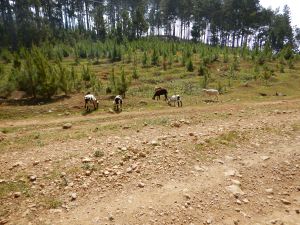 Come, let us sing for joy to the Lord ; let us shout aloud to the Rock of our salvation. Let us come before him with thanksgiving and extol him with music and song. For the Lord is the great God, the great King above all gods. In his hand are the depths of the earth, and the mountain peaks belong to him. The sea is his, for he made it, and his hands formed the dry land. Come, let us bow down in worship, let us kneel before the Lord our Maker; for he is our God and we are the people of his pasture, the flock under his care. Today, if only you would hear his voice, “Do not harden your hearts as you did at Meribah,  as you did that day at Massah in the wilderness, where your ancestors tested me; they tried me, though they had seen what I did. For forty years I was angry with that generation; I said, ‘They are a people whose hearts go astray, and they have not known my ways.’ So I declared on oath in my anger, ‘They shall never enter my rest.” – Psalm 95:1-11

This passage has only a fleeting reference to water but it covered such interesting and familiar territory that I felt I should reflect on it. This psalm has been reprised many times in hymns and contemporary Christian music. I think what resonates for me with this psalm is the intimacy with God that it is describing. There is this amazing tension between the God in whose hand “are the depths of the earth, and the mountain peaks belong to him” and the God for whom we are the “people of his pasture, the flock under his care”. — majesty and intimacy at the same time.

In this psalm we are called to “shout aloud to the Rock of our salvation”. When was the last time you shouted to God, not in an angry fist shaking way but in a celebratory Super bowl kind of way. I know I cannot remember the last time I shouted for joy to the Lord. I am going to commit to doing that this week…. so if you hear about some crazy person arrested for disturbing the peace in west Michigan you will know I made good on my commitment.

What does it mean to be the people of God’s pasture and the flock under His care? I suppose it means: 1) we must be willing to be sheep, at least in relation to God; 2) we exist in God’s pasture; 3) we are to be a flock; and 4) we are under God’s care.

I have never been in a position to care for sheep, but my impression is that they are somewhat helpless, not so intelligent, and they require protection from predators that would seek to harm them. Humans tend to value the opposite of these attributes — independence, intellectualism, and self defense — rebellious sheep to be sure. So we must jettison our natural tendencies to join God’s “flock”.

We also exist in God’s pasture. He knows the pasture — every rock and bramble bush in it. If we want to navigate the pasture it makes sense to be connected to the one who knows it far better than we do. We can save ourselves a lot of time and anguish being lost by trusting the Shepherd to care for us.

Those who volunteer to be sheep are the flock. This implies that we are not to be lone sheep but rather we are to stick together as a “flock” as we seek and pursue God. Some might ask why we need other people to pursue God.   Why can’t we just pursue God as lone sheep? Short answer…I do not know. But it does seem clear that God has always worked within the context of community so who am I to question this approach? I also think that there is a softening of our strong-willed spirits that happens most effectively in community.

Lastly, we are under God’s care and protection. God has our backs. He loves us and wants to carry us like a son or daughter. He also believes in us and He wants us to believe in Him.

Prayer: God Thank You for being the good shepherd who loves us, knows the pasture, and wants us to live in community with other people who are seeking to know and love You.

8 Responses to The Flock Under his Care