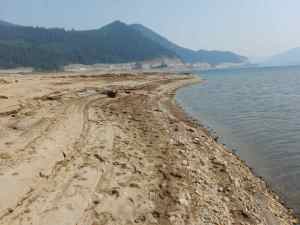 My heart cries out over Moab; her fugitives flee as far as Zoar, as far as Eglath Shelishiyah. They go up the hill to Luhith, weeping as they go; on the road to Horonaim they lament their destruction.   The waters of Nimrim are dried up and the grass is withered; the vegetation is gone and nothing green is left.   So the wealth they have acquired and stored up they carry away over the Ravine of the Poplars.   Their outcry echoes along the border of Moab; their wailing reaches as far as Eglaim, their lamentation as far as Beer Elim.   The waters of Dimon are full of blood, but I will bring still more upon Dimon — a lion upon the fugitives of Moab and upon those who remain in the land. – Isaiah 15:5-9

This passage is a continuation of yesterday’s passage about Moab and the judgement that was to befall them.  There is more weeping here from a heart-sick people who feel like God has forsaken them.  Apparently God’s judgement for Moab is not over yet.  The Moabites are fleeing both from their earthly oppressors and God, weeping and lamenting as they went.

The waters of Nimrim are dried up.  The very thing that allows them to survive in this sometimes harsh and dry land God has seemingly been taken away from them.  God does not even provide bitter water for the Moabites.  They, and those around them, were probably left asking “where is there God?”  The Moabites are experiencing a “dry time” both physically and figuratively – “the grass is withered; the vegetation is gone and nothing green is left”.

I have reflected several times before about the spiritual cycle that we experience as modern day followers of God.  We have both droughts and drenching rains and it is sometimes difficult to make sense of their pattern and purpose. I am pretty sure the deluge the Moabites are facing is hard and confusing, but sometimes God needs us to walk difficult roads to get our attention. In the case of this passage God not only dries up the waters of Nimrim, but the “The waters of Dimon are full of blood”.  The trials for those who choose to “remain in the land” are going to get even worse.

The act of choosing to “remain in the land” is like modern day God followers choosing to pursue earthly passions and pursuits rather than thirsting for God.  Investing energy and time in this land of oblivion rather than the undiscovered country to come.

Prayer: God help us to thirst for You and know that droughts and drenching rains may be part of a path You need us to follow.

2 Responses to Waters Full of Blood