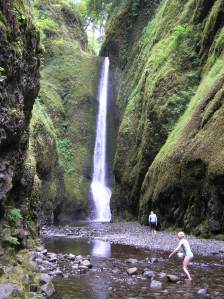 Therefore this is what the Lord says: “Inquire among the nations: Who has ever heard anything like this? A most horrible thing has been done by Virgin Israel.   Does the snow of Lebanon ever vanish from its rocky slopes? Do its cool waters from distant sources ever stop flowing?    Yet my people have forgotten me; they burn incense to worthless idols, which made them stumble in their ways, in the ancient paths. They made them walk in byways, on roads not built up.   Their land will be an object of horror and of lasting scorn; all who pass by will be appalled and will shake their heads.   Like a wind from the east, I will scatter them before their enemies; I will show them my back and not my face in the day of their disaster.” – Jeremiah 18:13-17

This passage continues the rich water imagery of the passage from yesterday.  God is speaking to the people of Jerusalem and Judah and asking the rhetorical question “Who has ever heard anything like this?”  The “this” here is the horrible turning away from God that the people have been doing.  I am not sure what the meaning of “virgin” Israel is but if we are to think of it in earthly terms “virgin” would mean something not yet taken for the purposes of earthly pleasures.  It seems God is saying that the terrible thing Israel has done is to give up their “virginity” with the idols of the land.

God has been a constant in the lives of the people of Israel, even though they were not able to see him or sense him at times and desired a more tangible God.  God uses water imagery to communicate about his constancy: “Does the snow of Lebanon ever vanish from its rocky slopes? Do its cool waters from distant sources ever stop flowing?”  God is describing “distant water” in the form of snow that is part of the hydrologic cycle feeding the rivers and springs from which nonstop cool waters flow.

The ever flowing waters sounds a lot like a spring that is fed by the water that melts in distant mountains.  I am originally from the state of Oregon and the Cascade Mountains are know for their beauty, and sometimes for their snow pack, which come spring provide abundant cold water for both springs and rivers that flow from the mountains.  They provide some degree of stability to the plants and animals that rely on these cold waters when the “dog days” of August arrive.

The times the people of Jerusalem and Judah are facing could very well be described as the “dog days of Babylon”.  They will face enslavement and death, but instead of relying on the water supply that God has provided in the form of Living Water they have turned to a substitute in the form of idols to “fill their jars“.  The idols they were following “made them walk in byways, on roads not built up.”  I take this to mean that they abandoned the well-worn paths that had served their ancestors in their efforts to faithfully follow God.

I think this passage provides some interesting application to modern-day God followers.  We also have become adept at seeking alternative water supplies.  This even occurs within out churches and gatherings as we try to feed consumer-driven followers.  We sometimes focus on a product rather than the process that we are called to work through together.

Prayer: God help us to seek the Living Water you provide and focus on the process of following You rather than a product we can receive.