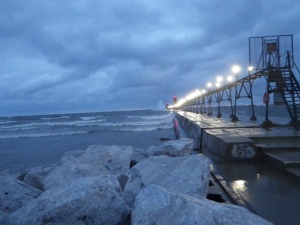 The sound of a cry comes from Babylon, the sound of great destruction from the land of the Babylonians.    The Lord will destroy Babylon; he will silence her noisy din. Waves of enemies will rage like great waters; the roar of their voices will resound.   A destroyer will come against Babylon; her warriors will be captured, and their bows will be broken. For the Lord is a God of retribution; he will repay in full.   “I will make her officials and wise men drunk, her governors, officers and warriors as well; they will sleep forever and not awake,” declares the King, whose name is the Lord Almighty.   This is what the Lord Almighty says: “Babylon’s thick wall will be leveled and her high gates set on fire; the peoples exhaust themselves for nothing, the nations’ labor is only fuel for the flames.”   This is the message Jeremiah the prophet gave to the staff officer Seraiah son of Neriah, the son of Mahseiah, when he went to Babylon with Zedekiah king of Judah in the fourth year of his reign. Jeremiah had written on a scroll about all the disasters that would come upon Babylon—all that had been recorded concerning Babylon. He said to Seraiah, “When you get to Babylon, see that you read all these words aloud. Then say, ‘ Lord , you have said you will destroy this place, so that neither people nor animals will live in it; it will be desolate forever.’ When you finish reading this scroll, tie a stone to it and throw it into the Euphrates. Then say, ‘So will Babylon sink to rise no more because of the disaster I will bring on her. And her people will fall.’ ” The words of Jeremiah end here.  – Jeremiah 51:54-64

God describes Babylon as having a “noisy din”.  Presumably this reference is largely metaphorical.  The “noise” God is talking about here is probably not the kind that your neighbor produces when they gather their garage band to practice at 1 am. God is implying that Babylon is a little like the “land of whirring wings” described back in Isaiah 18:1-7 — a place of pursuit without purpose or direction, a restless sea.  The people are probably scurrying about convinced they are accomplishing great things.

God is predicting that “Waves of enemies” that “will rage like great waters” will overtake Babylon and crush it, leaving only dry springs.  Anyone who has swam in heavy surf and waves knows the fatigue and sense of desperation that fighting against waves can bring.  God is describing this same sort of devastation for the Babylonians.  They will be caught in rip currents and raging torrents unlike any they have experienced.  They will not be able to swim their way out — “the peoples exhaust themselves for nothing, the nations’ labor is only fuel for the flames.”

The passage ends with some insight into how these prophetic words of Jeremiah, recorded on a scroll, are to be shared with the people of Babylon.  They are to be read to the Babylonians by a staff officer named Seraiah: “When you get to Babylon, see that you read all these words aloud”.  After Seraiah is finished reading the scroll he is to “tie a stone to it and throw it into the Euphrates.  Apparently this is to serve as a metaphor for the sinking of Babylon into destruction, “So will Babylon sink to rise no more because of the disaster I will bring on her. And her people will fall.”

I am struck by the last couple of words of this passage “her people will fall”.  I cannot help feeling that this is the fate of all the nations and people that are in “pursuit without purpose”.  God wants us to pursue Him.  If we invest our lives in pursuing passions other than God we also will fall (and fail).

Prayer: God You have built into us a passion for the pursuit of You.  Help us to pursue this passion above all others.