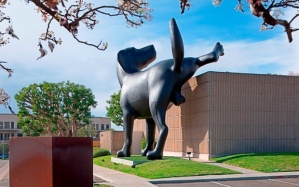 They have blown the trumpet, they have made all things ready, but no one will go into battle, for my wrath is on the whole crowd.   Outside is the sword; inside are plague and famine. Those in the country will die by the sword; those in the city will be devoured by famine and plague.   The fugitives who escape will flee to the mountains. Like doves of the valleys, they will all moan, each for their own sins.   Every hand will go limp; every leg will be wet with urine.   They will put on sackcloth and be clothed with terror. Every face will be covered with shame, and every head will be shaved. They will throw their silver into the streets, and their gold will be treated as a thing unclean.
Their silver and gold will not be able to deliver them in the day of the Lord’s wrath. It will not satisfy their hunger or fill their stomachs, for it has caused them to stumble into sin. They took pride in their beautiful jewelry and used it to make their detestable idols. They made it into vile images; therefore I will make it a thing unclean for them. I will give their wealth as plunder to foreigners and as loot to the wicked of the earth, who will defile it. I will turn my face away from the people, and robbers will desecrate the place I treasure.
They will enter it and will defile it. – Ezekiel 7:14-22

In the past several passages God is describing a wrath of God which is horrible.  Parents will eat their own children, sacred places will be desecrated, and many will die terrible deaths. The wrath of God will fall on all who stay in the city of David, Jerusalem.  They apparently will not be able to even defend themselves – “…but no one will go into battle, for my wrath is on the whole crowd.”  God is really angry with the people of Jerusalem.  They cannot escape the city as the sword awaits them on the outside and “plague and famine” wait for them on the inside.  All is lost and they are separated from God.

Even the lucky few who escape this wrath will become like “doves of the valley” separate and lost in their own sins.  The people will lose all their strength and even wet themselves in their fear and sense of loss. I confess I have not had the experience of “wetting myself” out of fear, but it cannot be a very positive experience.

All the material possessions that have taken the place of God in the lives of the people, their gold and silver, will be tossed into the streets, worthless.  Clearly the rich and the poor will be subject to God’s wrath, regardless of positions, power, or prestige. No one will be able to “buy” their way out of the wrath that is coming.

God is clearly indicating that the people have grown accustomed to trusting things rather than Him and the consequences are that God will leave them with only these things to defend themselves in the coming calamity.  They have taken the prosperity and promise that God provided them in the Promised Land and selfishly squandered it on themselves.

God is even willing to allow something that is sacred to Him, the temple, to be defiled in order to get the people’s attention…this sounds eerily familiar. Jesus came to earth to atone for our sins.  He constantly tried to help people realize that they were using the gifts of God on the wrong things and in the wrong way. God allowed Jesus to endure the cross, the ultimate defiling so that we would realize what we were using to replace God in our lives. God wants us to be fueled by Him and nothing else.  Any other fuel will only result in misfires and a poorly operating “engine”.

Prayer: God You are the fuel that we are designed to run on.  Help us to see the things we are using to replace You in our lives.

1 Response to Wet with Urine