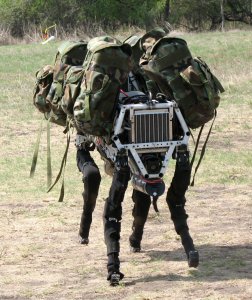 Blow the trumpet in Zion; sound the alarm on my holy hill. Let all who live in the land tremble, for the day of the Lord is coming. It is close at hand— a day of darkness and gloom, a day of clouds and blackness. Like dawn spreading across the mountains a large and mighty army comes, such as never was in ancient times nor ever will be in ages to come. Before them fire devours, behind them a flame blazes. Before them the land is like the garden of Eden, behind them, a desert waste— nothing escapes them. They have the appearance of horses; they gallop along like cavalry. With a noise like that of chariots they leap over the mountaintops, like a crackling fire consuming stubble, like a mighty army drawn up for battle. – Joel 2:1‭-‬5

Well this is a cheery passage…I guess God, through Joel, is trying to get the attention of “all those who live in the land” – blowing a trumpet in Zion. This apocalyptic vision is full of darkness and gloom, “a day of clouds and blackness” to be sure. Clouds up to this point have usually been used in reference to God. God has shown up as a “cloud in the temple“, “clouds high above us“, and this very same phrase “a day of clouds” was used back in Ezekiel 30:1‭-‬19 to describe a coming calamity that was to befall pharaoh and Egypt.

In this passage the target is Zion and it not clear whether this event has already happened or is yet to come from our current position in history. The passage suggests that this event is like nothing that has happened or will happen again, “Like dawn spreading across the mountains a large and mighty army comes, such as never was in ancient times nor ever will be in ages to come.” This seems like an end times reference to me, something like the many invaders that are prophesied to “cleanse the land” in Ezekiel 39: 9‭-‬14.

What is being described here is the ultimate in a “scorched earth” campaign, “Before them the land is like the garden of Eden, behind them, a desert waste— nothing escapes them”. At this point the passage takes a perplexing turn into what appears to be metaphor. The invaders are described as having “the appearance of horses; they gallop along like cavalry”. So what looks like a horse but is not a horse and can wreak havoc in the land? The first thing that came to my mind is the robots currently under development by the U.S. Defense Advanced Research Projects Agency (DARPA) and Boston Dynamics. They have several robots that behave in eerily life-like ways and could unquestionably be weaponized at some point if we and our leaders allow it.

I hope I am wrong, but it seems the age of robots in warfare is almost inevitable. We already use human piloted drones to strike far flung targets with no humans on board. I do not think it is hard to imagine a time when military planners would be able to justify the use of humanoid or other robots in conflicts because they would reduce human casualties, presumably that is the same argument being used to justify remote drone use for targeting enemies now.

The coming hoard in this passage, whether it is a metaphor for something else or not, is described as coming “With a noise like that of chariots they leap over the mountaintops, like a crackling fire consuming stubble”. It seems like this invasion is going to be something different than humans have seen before, maybe something mechanical in nature “like a chariot”, based on the description here. Perhaps all of this is merely meant to describe an army that has already invaded Zion, but passages like this certainly make me wonder.

So what is one to take away from a perplexing passage like this? I do not know. The thing that it makes me remember is that there is potentially a tapestry of time and history that has already been laid and God sees the entire thing at once. We are simply one “thread” in this tapestry that is fixed in time. Our job is not to try to unravel the tapestry so that we can find our place in it, but rather to allow God to weave us into it when and where He needs us.

Prayer: God help me to see where I fit into Your plans so that I am not working against them.