Draw Water for the Siege 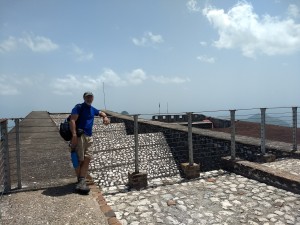 Rainwater Catchment at the citadel in Haiti

Draw water for the siege, strengthen your defenses! Work the clay, tread the mortar, repair the brickwork! There the fire will consume you; the sword will cut you down— they will devour you like a swarm of locusts. Multiply like grasshoppers, multiply like locusts! You have increased the number of your merchants till they are more numerous than the stars in the sky, but like locusts they strip the land and then fly away. – Nahum 3:14‭-‬16

For those in the United States, Happy 4th of July! This is the last water-related passage in the book of Nahum. It is an interesting book, but I confess it was not an exhilarating whitewater stretch of “the river“.

I recently returned from Haiti where I was leading a group of intrepid students on a 4-week study abroad program. One of my favorite stops on our tour was at a fort called the Citadel built by Haitians shortly after their revolution. In 1804 the former slaves overthrew the French colonialists to emerge from the shackles of slavery and govern themselves. The road to self-governance has been a rocky road with many potholes and detours for Haiti, but the Citadel is an awe-inspiring example of what the people of Haiti could do when they worked with a common purpose toward a shared goal.

It is fitting that this post should be occurring on the day the United States celebrates its independence day. I think in many ways the slave revolt in Haiti was inspired by our revolution. It is a shame we did not embrace their revolution because of our own Faustian bargain with forced labor (slavery), but I digress…back to the passage and the citadel.

Near the top of the citadel is an ingenuous rain water catchment system that fed into water storage systems for the fort so that the people in the fort could have water even during a prolonged siege. That is what this passage is talking about, being prepared for a lengthy siege.

As I have pondered this passage it occurs to me that if one thinks of this passage as a metaphysical metaphor there may be an interesting hidden well here. This may be a stretch but bear with me.  In many ways the earthly existence for our souls is like a lengthy spiritual siege. Our water source for this siege is supposed to be God, the great cistern. Unfortunately it is easy to become distracted by the demands of our physical world and “Work the clay, tread the mortar, repair the brickwork!” for our defenses rather than tend to the real defenses that are fundamentally spiritual.

This blog has helped me to remember this spiritual dimension to my otherwise secular life. It is so easy to become distracted by the daily demands of living. I have been at this journey for just over four years since my first post on June 22, 2014.  There have been blocks of time off the water and  I am still in the old testament, but the stretch of the braided river that is the new testament is rapidly approaching.  I am excited to see what God has to teach me about how the rich water imagery in the old testament serves as a “tributary” for the new testament.

Prayer: God help me to recognize the need for spiritual preparation and defenses and invest time and energy preparing for spiritual siege.

1 Response to Draw Water for the Siege