Me “adopting” a pile of stones at the site of the Winter Olympic Games in Whistler BC, Canada

But when he saw many of the Pharisees and Sadducees coming to where he was baptizing, he said to them: “You brood of vipers! Who warned you to flee from the coming wrath? Produce fruit in keeping with repentance. And do not think you can say to yourselves, ‘We have Abraham as our father.’ I tell you that out of these stones God can raise up children for Abraham. The ax is already at the root of the trees, and every tree that does not produce good fruit will be cut down and thrown into the fire. “I baptize you with water for repentance. But after me comes one who is more powerful than I, whose sandals I am not worthy to carry. He will baptize you with the Holy Spirit and fire. His winnowing fork is in his hand, and he will clear his threshing floor, gathering his wheat into the barn and burning up the chaff with unquenchable fire.” – Matthew 3:7‭-‬12

John goes a little “off the rails” in this passage when the religious leaders (Pharisees and Sadducees) come to the place at the Jordan River where His is baptizing those who are willing to heed the previous signposts and repent of their sins. He calls these leaders a “brood of vipers!”, which conjures in my mind a den or pile of poisonous snakes.

I have had my share of experiences with snakes, some of which were venomous.  Thankfully none of my encounters has resulted in being bitten or exposed to the venom of these snakes. I think perhaps one of my most harrowing memories about snakes is when we I was working as an exploration geologist near Salmon, ID.  We were looking for gold on a ranch north of town and were concerned about encountering rattlesnakes instead of gold.  We asked the owner of the ranch if there were many rattlesnakes in the area and he responded that there were hardly any. 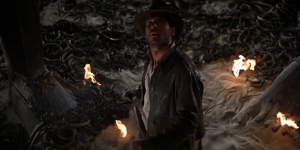 One of the first days out on the ranch three or four of us were walking up a hillside talking about rocks and mapping when we came upon a large boulder with a small cave or hollow beneath it.  As we approached the boulder we heard something that sounded like a swarm of bees.  When we got closer and could see into the dark pit we realized it was not a swarm of bees, but rather a swarm of snakes!  There were snakes of all sizes and shapes congregating in this pit to keep warm in the chilly weather of early spring in the mountains of Idaho. It was truly an Indiana Jones experience I will never forget.  I, like Indiana, do not like snakes. Looking back we did a rather cowardly thing and killed most of these snakes so they would not emerge and bite us later in the summer. I wish we had come up with some other solution.

But I digress, back to the Jordan River, John the Baptist, and his “brood of vipers”.  The religious leaders were spreading all sorts of venom (bad fruit) when they were supposed to be bearing good fruit and attracting people to seek and find the God who sees them. Their reason for doing this was apparently that they felt in some way entitled because of their ancestry. They were the decedents of Abraham, and God’s chosen people, a legacy they were quick to remind everyone about.

Their focus was fundamentally on themselves and their position rather than the God that made the promise to Abraham in the first place and was the reason their power and position even existed. The consequences of their moral myopia is not so good for the religious leaders, but a good thing for all those not born into the Jewish faith or nationality, “I tell you that out of these stones God can raise up children for Abraham. The ax is already at the root of the trees, and every tree that does not produce good fruit will be cut down and thrown into the fire.” John is implying that a time is coming, and in fact has arrived, when God will adopt other “children” who choose to bear good fruit.

Then comes the water-related reference, “I baptize you with water for repentance.” John is using water to symbolize a change in the souls of those willing to repent and begin to bear good fruit for God. He shows all his cards and reveals that he is not the long-awaited Messiah, but He is coming soon. He will baptize in a different way, with the Holy Spirit and fire. God Himself will come and be with us, Emmanuel.

This is a great thing for all of us “adopted stones”, but not so good for those who have chosen to take another path, “His winnowing fork is in his hand, and he will clear his threshing floor, gathering his wheat into the barn and burning up the chaff with unquenchable fire.” Better to be children than chaff in my book. God gives us all the choice of being “wheat” or “chaff”. He is about to arrive and start the threshing process, a process that continues to this day as people choose to pursue God or other priorities in their lives.

Prayer: God thank You for adopting us “stones” so that we can share in the inheritance of your Holy Spirit.