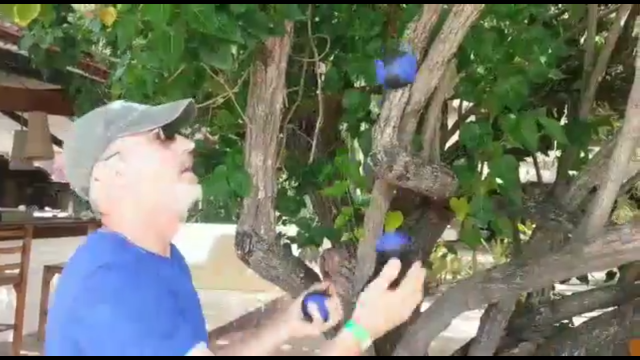 Early in the morning, as Jesus was on his way back to the city, he was hungry. Seeing a fig tree by the road, he went up to it but found nothing on it except leaves. Then he said to it, “May you never bear fruit again!” Immediately the tree withered. When the disciples saw this, they were amazed. “How did the fig tree wither so quickly?” they asked. Jesus replied, “Truly I tell you, if you have faith and do not doubt, not only can you do what was done to the fig tree, but also you can say to this mountain, ‘Go, throw yourself into the sea,’ and it will be done. If you believe, you will receive whatever you ask for in prayer.” – Matthew 21:18‭-‬22

Merry Christ Mass! Today’s post has nothing to do with Christmas, but it does contain a reference to water, so off we go.

I confess this passage has always puzzled me a bit. The image of Jesus rebuking the fig tree for failing to bare fruit is somewhat shocking and dissonant with what I know of the character of Jesus.

I think the real target of Jesus here was not the tree, but rather his disciples who were apparently in danger of appearing like the fig tree, all leaves and no fruit. I think there is some deep water here that Jesus is attempting to convey to the disciples so let’s dive in!

The disciples are understandably amazed by the withered fig tree. I think if they were being honest they would also admit to a hint of fear. This miracle was different. The fig tree was not helped or healed – it was destroyed. They ask “How did the fig tree wither so quickly?”

This seems like kind of dumb question as Jesus just verbally rebuked the tree with the statement “May you never bear fruit again!” Now I suppose one could argue that never bearing fruit is not the same as withering and dying, but Jesus seems to be equating these two states.

Jesus tells the disciples that not only can they do similar miracles, but they are capable of much more. They will be able to say to a mountain “Go, throw yourself into the sea,’ and it will be done.”

The prerequisites for this power are prayer and believing “If you believe, you will receive whatever you ask for in prayer.” I think order is important. First we must believe, then we must pray, then it will be done for us.

So a valid follow up question might be if all it takes is belief and prayer are followers of Christ capable of miracles on a regular basis? If not, why not? Short answer, I do not know. I suspect it has something to do with our ability to believe with the same confidence that Jesus and the disciples had.

I am not saying that this confluence of belief and prayer does not happen. I think it is just harder than it looks. Kind of like when we see someone juggling five balls in the air at once. I can attest as a juggler that this is really hard and requires many hours of practice. It also requires a lot of dropped balls.

Perhaps the belief and prayer that Jesus is alluding to here is equally hard and also requires many hours of practice, including “dropped balls”. It seems harder to accept unanswered prayers than dropped juggling balls, but maybe they are not so different in the greater scheme of things.

Prayer: God help us to believe and ask for what we need with confidence.