Sight from the Savior 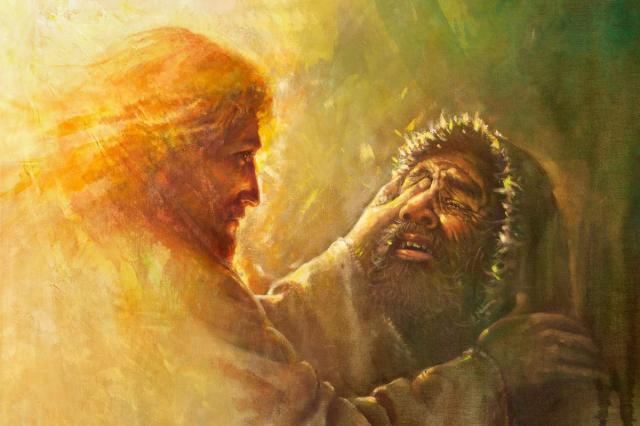 They came to Bethsaida, and some people brought a blind man and begged Jesus to touch him. He took the blind man by the hand and led him outside the village. When he had spit on the man’s eyes and put his hands on him, Jesus asked, “Do you see anything?” He looked up and said, “I see people; they look like trees walking around.” Once more Jesus put his hands on the man’s eyes. Then his eyes were opened, his sight was restored, and he saw everything clearly. Jesus sent him home, saying, “Don’t even go into the village.” – Mark 8:22‭-‬26

So the topic of today’s passage is something a bit odd and some might say irreverent, spit from a savoir. Jesus performs a miraculous healing of a blind man and in so doing provides a powerful metaphor for the healing He offers all of us blind cave dwellers. This healing feels deeply personal and intimate with Jesus actually sharing part of his essence, His spit, with this blind man.

On a purely human level this would seem to be a bit gross to have someone spit on your eyes.  In fact in our current culture this could be deemed an insult worthy of retribution, but clearly that is not the way Jesus intends this act to be received. The Godly condensate, Jesus, is sharing part of Himself with this man in order to heal him.

Viewed metaphorically this healing takes on interesting meaning.  If the face represents a reflection of our inner soul, and the eyes a window to it, then Jesus in healing this man has not only given him sight but he has opened his heart to a new kind of relationship with God.  I find it interesting that the new sight is at first imperfect and allows the man to “see people; they look like trees walking around.”  It requires a second touch from the savoir to fully restore his vision.

At Jesus’ second touch “his sight was restored, and he saw everything clearly.”  Certainly this was a physical healing of his optical machinery but I think, perhaps more importantly, it was a healing of his metaphysical machinery.  He needed help to “see” the undiscovered country that is the Kingdom of God that Jesus was offering with his spit and touch.  A few more letters and the word “spit” becomes a more familiar word “spirit”.  I think that is the real gift that Jesus gave this man at Bethsaida.

Jesus offers this same gift to all those who are willing to choose to follow Him and allow their eyes to be opened.  I think what is often holding us back is that we do not realize we are blind.  Our spiritual sight has atrophied through lack of use.  We think we see the world around us clearly when in fact we see only the physical world and miss the forest for the trees.  We miss opportunities to participate in God’s shaping of our souls because we do not think they require modification.  Even when we submit to God’s healing we sometimes settle for seeing the metaphysical world like this man saw the people, “like trees walking around.”

This man had an obvious physical need and a not so obvious spiritual need.  Jesus healed both.  We are all similar to the blind man in this respect, whether we know it or not.

Prayer: God open our eyes to the spiritual world around us so we can take part in the new things You have for us.

4 Responses to Sight from the Savior