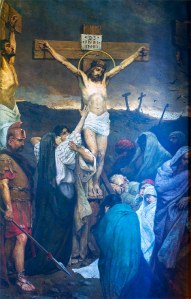 The Crucifixion of Jesus Christ by Wilhelm Kotarbinski

Later, knowing that everything had now been finished, and so that Scripture would be fulfilled, Jesus said, “I am thirsty.” A jar of wine vinegar was there, so they soaked a sponge in it, put the sponge on a stalk of the hyssop plant, and lifted it to Jesus’ lips. When he had received the drink, Jesus said, “It is finished.” With that, he bowed his head and gave up his spirit. Now it was the day of Preparation, and the next day was to be a special Sabbath. Because the Jewish leaders did not want the bodies left on the crosses during the Sabbath, they asked Pilate to have the legs broken and the bodies taken down. The soldiers therefore came and broke the legs of the first man who had been crucified with Jesus, and then those of the other. But when they came to Jesus and found that he was already dead, they did not break his legs. Instead, one of the soldiers pierced Jesus’ side with a spear, bringing a sudden flow of blood and water. The man who saw it has given testimony, and his testimony is true. He knows that he tells the truth, and he testifies so that you also may believe. These things happened so that the scripture would be fulfilled: “Not one of his bones will be broken,” and, as another scripture says, “They will look on the one they have pierced.” – John 19:28‭-‬37

Happy New Year!  This passage is a tumultuous way to end a turbulent 2020 and begin a hopefully different 2021.  Not since the 1918-1919 Spanish Flu pandemic has there been a such a global health crisis and, apparently despite the vaccines, it is not over yet.  Hopefully we will be able to avoid some of the lasting after effects that people in the 1920’s, 30’s, and 40’s experienced.  Time will tell, but back to today’s bit of rough water – the end of Jesus’ earthly existence.  I confess this is a hard passage to read and reflect on, but I signed up to float the entire river which includes both quiet waters and rapids so here goes.

Jesus is in the midst of being killed by the people He came to heal and help through one of the most horrific means imaginable – crucifixion.  I will not dwell on the sordid specifics of crucifixion and the physical cruelty it represents.  Suffice to say it would qualify as cruel and inhumane punishment by any measure and in most cultures past and present.

Jesus is playing out an event that has been prophesied for hundreds, or even thousands, of  years (Psalm 69:19-21).  He is thirsty.  I am sure his physical body was thirsty and in great pain but I think there was a spiritual component to His thirst.  In a divine dynamic that I do not fully understand God allowed Himself to become separated from the spiritual world for a time so that He could be fully human.

I am not sure why this physical sacrifice and spiritual separation was required, but for some time Jesus has known that this was coming.  Perhaps there is a metaphysical reason for this crossing over onto our side of the river that defies our earthly understanding.  Clearly Jesus and God thought this sacrifice was needed to accomplish the forgiveness of our sins and restore a right relationship between us and God.

I can think of a few explanations but this is really like a five year old trying to explain nuclear physics – so forgive my potentially misguided musings.  I have come up with three possible reasons: 1) to provide us with an example of radical love and sacrifice; 2) to give us a destination to shoot for on “this side of the river”; 3) to satisfy some aspect of the spiritual world that is outside our earthly understanding.  I am sure there are many more possibilities but these are the ones that rose to the surface today.  I am sure others will emerge as I float on down the river.

Certainly Jesus’ willingness to die rather than betray His purpose qualifies as an example of the radical love that God has for each of us and the sort of love we are to have for God and others.  His death was also a reminder of the level of sacrifice required to be with Him for eternity.  We are to be willing to sacrifice everything in pursuit of God just as He did for us.  The closest earthly analogy I can think of for the kind of spiritual separation that Jesus endured for us humans would be whole body paralysis through some sort of spinal injury.  I cannot imagine how this would feel and how devastating that sort of disconnection would be both for your body and your soul.  I would think that such an injuring would bring into focus the inner part of our being and make it clear who we are when stripped down to the soul.

The second possibility is that the overcoming of death by Jesus served as a sort of beacon or lighthouse to lead us to the river that no one can cross. Finding this impassable river is important, but not really the hard part.  Once we find the river we must use the faith and following techniques we practiced throughout our journey home so we are ready to take Jesus’ hand so he can lead us across the river.

The third possibility involves satisfying some “deep magic” as C.S. Lewis put it in the Lion the Witch and the Wardrobe.  This children’s story is an amazing allegory for the life of Jesus.  In the story Aslan, the great lion and Christ figure, must allow himself to be killed by the witch and her followers to rescue Edmund the traitor.  This act of allowing an innocent to be killed in Edmund’s place satisfied some deep magic which is not really explained in the book.  I do not fault C.S. Lewis for this omission.  It, like the sacrifice Jesus subjected Himself to, may defy earthly explanation.  I am content to admit that there may well be spiritual laws that govern the unseen spiritual world; just like physical laws like gravity govern the physical world.  The fact that these spiritual laws may in some sense be unknowable from our earthly reference frame does not surprise me or sink my faith in the profound importance and meaning of this event.

The water reference comes into this passage is a rather Macabre way when the soldier pierced Jesus’ side and it brings forth “a sudden flow of blood and water”.  I am not sure what the significance of this is other than that the One who called Himself the living water willingly poured himself out for us and it is His blood that He promised would cover our sins.  That is amazing enough for me.

Prayer: God thank You for giving up Your life for us as an example of radical love and sacrifice.

5 Responses to Blood and Water