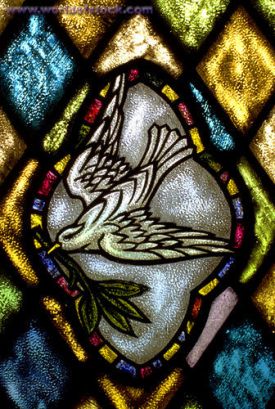 Then he sent out a dove to see if the water had receded from the surface of the ground. But the dove could find no place to set its feet because there was water over all the surface of the earth; so it returned to Noah in the ark. He reached out his hand and took the dove and brought it back to himself in the ark.  He waited seven more days and again sent out the dove from the ark.  When the dove returned to him in the evening, there in its beak was a freshly plucked olive leaf ! Then Noah knew that the water had receded from the earth.  He waited seven more days and sent the dove out again, but this time it did not return to him.  By the first day of the first month of Noah’s six hundred and first year, the water had dried up from the earth. Noah then removed the covering from the ark and saw that the surface of the ground was dry.  By the twenty-seventh day of the second month the earth was completely dry. – Genesis 8:8-14 (NIV)

After reading this and the previous passages it seems that the Noah account is an interwoven fabric of at least three different types of narratives: 1) an allegorical account which perhaps draws upon local legends or descriptions of great floods; 2) actual details of a regional flood which occurred as a historical event in the region of the Tigris and Euphrates Rivers; 3) numerological details, such as the references to seven days, which may have been added later. The third item seems the only explanation I can some up with to explain the excessive details regarding timing of the drying up and other events related to the flood. Some of these details read as if they are inconsistent with one another. For example, verses 8:4,5 from the previous passage seem to be making contradictory statements, i.e. the ark came to rest on the mountains or Ararat before they were in fact exposed.  It is this sort of interweaving of details which leads me to think that this narrative is an interwoven fabric of accounts.

The spiritual meaning I glean from these passages is that Noah was actively and regularly “sending out” out the Dove to determine if the flood was over.  When we are in the midst of “life-floods” it can be easy to hunker down and become self-absorbed.  Hold up in our Ark with the shutters closed if you will.  What does it look like for us to “send out doves” during these times?  Perhaps it means asking for, or accepting, help from those who care for us.  Coffee with a friend or relative to talk about the “life-flood” we are experiencing.

Prayer: God help me to actively send out, and reach out, to others during times of trial and floods in my life.