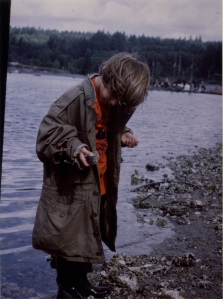 The fear and dread of you will fall upon all the beasts of the earth and all the birds of the air, upon every creature that moves along the ground, and upon all the fish of the sea; they are given into your hands. Everything that lives and moves will be food for you. Just as I gave you the green plants, I now give you everything. – Genesis 9:2-3 (NIV)

I never really noticed that this is the first time that God gave man “permission” to give up being a vegetarian. I was a vegetarian in college for two years.  Have you ever tried to survive as a vegetarian on dorm food from the 1980’s…it was not pretty.  Lots of grilled cheese sandwiches and salad.  My reasoning at the time was not from a Christian perspective as I did not become a Christian until later.

I originally became a vegetarian because 1) my vegetarian hero Mohandas Gandhi was one; and 2) I have always disliked killing things if I could help it. I guess I always assumed that the change over to a non-vegetarian diet occurred as Adam and Eve left the garden of Eden after the Fall. The only connection to water in this passage is the mention of fish in the sea, it seems that before this man was not eating fish.  That leads me to wonder what Noah and his family were eating while they were on the ark.  Were they vegetarian?  Did they bring along a few extra animals?  Did they actually eat fish?  All very interesting questions that we may not know the answer to until we can ask God face to face.

One deeper truth that may be embedded in this passage is that God “now gave us everything”, including his son Jesus Christ and forgiveness for our sins.  There are times when it is easy to take for granted the freedom we have in Christ, but it is one of the things that rang true for me about Christianity.  Most other world religions, including some forms of Christianity, seem to decrease freedom rather than increase it.

Prayer: Thank you God that you have given us everything.  Grant me the wisdom to use this freedom wisely.