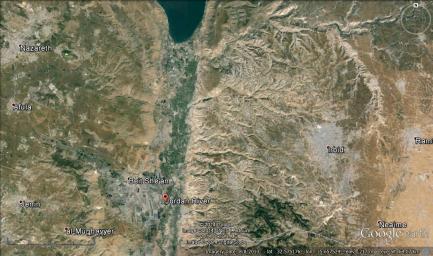 This is the first time I have noticed where a decision in the bible was influenced by the presence or absence of water. The plain of the Jordan is compared to the Garden of Eden and to the Nile Delta in Egypt. The very presence of water influenced Lot’s decision to “go left” and part ways with Abram so that the numerous livestock and herders would not be in conflict. So, fundamentally, this was the first conflict related to resources and water that is described in the bible. The conflict was resolved in this case because Abram gave Lot the choice of locations to send his herds and people. The plain of the Jordan River remains one of the most productive locations in the region to this day.

What does it mean for the land to be “well-watered”? In this case the water comes from flooding of the low, flat, floodplain of the Jordan River.  This fertile plain contains the silt, sand, and nutrients from many floods.  What would it look like for us as followers of God to be “well-watered”, with the living water described by Jesus.  Perhaps it means our souls would be capable of producing abundant fruit.  We may also have “deposits” left behind by the life-floods we have experienced.  I think the way we view these life-floods and what they leave behind will determine whether our lives become a muddy bog that breeds mosquitoes, or a fertile floodplain that bears much fruit for God’s Kingdom.

Prayer: God help me to develope a fertile and well-watered soul that will bear much fruit.