A Rafted Baby and Rappelling to Church 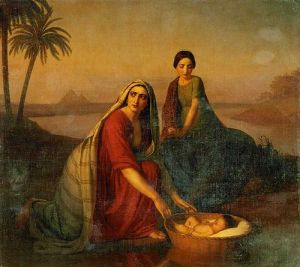 Now a man of the tribe of Levi married a Levite woman, and she became pregnant and gave birth to a son. When she saw that he was a fine child, she hid him for three months.  But when she could hide him no longer, she got a papyrus basket for him and coated it with tar and pitch. Then she placed the child in it and put it among the reeds along the bank of the Nile.  His sister stood at a distance to see what would happen to him.  Then Pharaoh’s daughter went down to the Nile to bathe, and her attendants were walking along the riverbank. She saw the basket among the reeds and sent her female slave to get it.  She opened it and saw the baby. He was crying, and she felt sorry for him. “This is one of the Hebrew babies,” she said.  Then his sister asked Pharaoh’s daughter, “Shall I go and get one of the Hebrew women to nurse the baby for you?”  “Yes, go,” she answered. So the girl went and got the baby’s mother.  Pharaoh’s daughter said to her, “Take this baby and nurse him for me, and I will pay you.” So the woman took the baby and nursed him.  When the child grew older, she took him to Pharaoh’s daughter and he became her son. She named him Moses, saying, “I drew him out of the water.”  – Exodus 2:1-8

This famous story of the birth of Moses has been told so many times we are in danger of losing sight of its meaning. Moses’ mother technically did what the Pharaoh commanded in placing the baby in the Nile.  She acted in a way that allowed God to move in the heart of Pharaoh’s daughter to save the baby.  In this case God prevented the waters of the Nile from being used for an evil purpose (killing a baby) by working through Moses’ mother and a non-jew Pharaoh’s daughter. Moses was protected from the evil misuse of the Nile River by God. The effort to save the baby must have seemed like a long shot to his mother, but God arranged things in a way that no human would have predicted or planned.  It is hard to imagine what was going through the mind of Moses’ mother when she placed her baby in the Nile River and in God’s hands.  It must have taken an amazing level of faith in God.

Do I have the level of faith that Moses’ mother showed?  What things in my life are as important as a newborn baby that I am willing to set adrift on a river and trust that God will show up?  Am I able to trust God with even smaller details of my life?  The honest answer is no.  So how does one get “better” at trusting God?   Probably the same way one gets better at tennis or soccer — practice.

I used to work as an exploration geologist in Montana at a Gold mine called the Zortman Mine, near the town of Zortman Montana.  I was part of a mine rescue team and we would train in the mountains around town “rescuing” each other using ropes, and rock climbing and spelunking techniques.  We trained so that if we were called on we would know what to do.  Perhaps we as Christians need to be “training” to trust God.

I remember one sunday I was mine rescue training with the leader Wayne who was a fellow Christian.  We heard the church bell ring in the town while we were on a mountain roughly 300 feet above the church about 1/3 of a mile across rough terrain.

When we heard the church bell we looked at each other and said “let’s go”.  So we proceeded to rappel down the rock face and jog through the trees to church.  We arrived in our climbing gear with carabiners jingling like cow bells.  We got some interesting looks from the people in the pews as we settled in to listen to the service.  Rappelling to church with Wayne was a shared “leap” of faith that I will never forget.   I learned a couple things from this experience 1) following God can be an adventure; 2) stepping out (or in this case off a cliff) in faith is easier if you are with someone else; and 3) practicing little steps of faith make it easier to take larger steps of faith when they are needed.

Prayer: God give me the faith to prayerfully participate in your plans even when I do not understand how they could possibly work.  Help me to take baby steps of faith so that I am prepared when larger steps are needed.