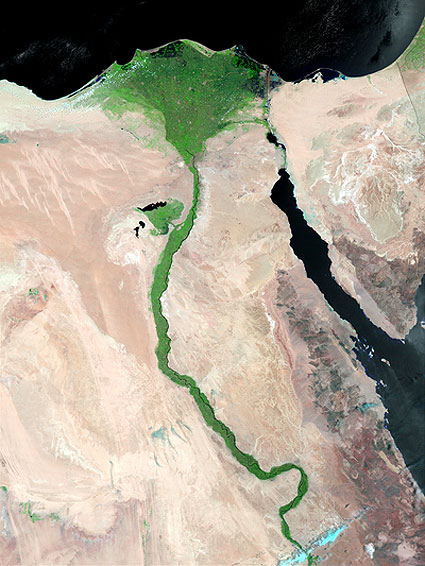 Then the LORD said to Moses, “Pharaoh’s heart is unyielding; he refuses to let the people go.  Go to Pharaoh in the morning as he goes out to the river. Confront him on the bank of the Nile, and take in your hand the staff that was changed into a snake. Then say to him, ‘The LORD, the God of the Hebrews, has sent me to say to you: Let my people go, so that they may worship me in the wilderness. But until now you have not listened. This is what the LORD says: By this you will know that I am the LORD: With the staff that is in my hand I will strike the water of the Nile, and it will be changed into blood. The fish in the Nile will die, and the river will stink; the Egyptians will not be able to drink its water.’”  The LORD said to Moses, “Tell Aaron, ‘Take your staff and stretch out your hand over the waters of Egypt—over the streams and canals, over the ponds and all the reservoirs—and they will turn to blood.’ Blood will be everywhere in Egypt, even in vessels of wood and stone.”  Moses and Aaron did just as the LORD had commanded. He raised his staff in the presence of Pharaoh and his officials and struck the water of the Nile, and all the water was changed into blood.  The fish in the Nile died, and the river smelled so bad that the Egyptians could not drink its water. Blood was everywhere in Egypt.  But the Egyptian magicians did the same things by their secret arts, and Pharaoh’s heart became hard; he would not listen to Moses and Aaron, just as the LORD had said.  Instead, he turned and went into his palace, and did not take even this to heart. 24 And all the Egyptians dug along the Nile to get drinking water, because they could not drink the water of the river.  – Exodus 7:14-24

In this passage Moses is commanded to meet Pharaoh by the Nile River; Juxtaposing the god of Pharaoh that was the Nile and the God of Abraham, Jacob, Joseph, and Moses.  The scene kind of reminds me of the showdown at the OK corral, except Moses was toting a shape shifting staff and pharaoh was armed with an unyielding heart.

This passage recounts miraculous events.  I believe that God does miracles, but I do not think God uses them simply to impress or awe people into following him.  God uses miracles to change human hearts and minds.  That being said I can view this miracle at least three ways, sort of like some of the details of the Noah’s flood narrative.  I can believe that 1) God suspended the natural laws or changed them; 2) The account was describing actual events but not in the exact order, timing, or sequence described; or 3) The account was purely allegorical and poetic and not intended to be read as a scientific account.  I favor a combination of #1 and #2.  The details of the account are consistent with natural biochemical processes that do occur, but the timing and rate at which they occur are seemingly supernatural.

This account of the Nile river turning to “blood” is a very apt description of a phenomenon known as “red tide” in many areas of the globe.  The red tide phenomenon is caused by an algal bloom resulting from excess nutrients or some other biochemical imbalance in water.  The Nile’s water temperature is relatively warm year round and get’s up to around 80 F in the summer.  This is prime conditions for algae and bacterial growth.  The algae and diatoms (single-celled aquatic organisms that produce silica shells) that are associated with red tide often produce poisonous toxins that can make humans sick.

The timing of the algal bloom described is not realistic from a scientific point of view but all the other parts of the account are sound from a scientific point of view.  When the algae died they would fall to the bottom of the river using up all the oxygen creating a black mess smelling of rotten eggs (stink).  The lack of oxygen in the water would certainly have resulted in the death of many fish and other organism that lived in the river.  The solution to the “bloody water” problem was to dig near the river to access water that was filtered by the river sediments.  This a wise practice even today for those needing water near a river.  In fact we have adopted a similar technique to what the Egyptians are described as doing for installing wells in rural Haiti.

The description says that even pharaoh’s magicians could turn the river into blood.  This is not too surprising in that the phenomenon was probably not uncommon in the spring and summer.  The magicians need only claim to have created something that was actually occurring naturally.  The unique thing about Moses and Aaron’s miracle was that it happened on command.  So as a Christian and a scientist I can accept God accelerating otherwise natural processes to change pharaoh’s “unyielding heart”.  Jesus certainly did similar things many times while we was on earth to reach those in need of Him.

Prayer: Lord give me the confidence to ask for miracles in my life, knowing that you can make the impossible possible and give hope to the hopeless.