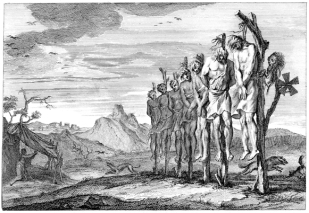 The king spared Mephibosheth son of Jonathan, the son of Saul, because of the oath before the Lord between David and Jonathan son of Saul. But the king took Armoni and Mephibosheth, the two sons of Aiah’s daughter Rizpah, whom she had borne to Saul, together with the five sons of Saul’s daughter Merab, whom she had borne to Adriel son of Barzillai the Meholathite. He handed them over to the Gibeonites, who killed them and exposed their bodies on a hill before the Lord. All seven of them fell together; they were put to death during the first days of the harvest, just as the barley harvest was beginning.   Rizpah daughter of Aiah took sackcloth and spread it out for herself on a rock. From the beginning of the harvest till the rain poured down from the heavens on the bodies, she did not let the birds touch them by day or the wild animals by night. When David was told what Aiah’s daughter Rizpah, Saul’s concubine, had done, he went and took the bones of Saul and his son Jonathan from the citizens of Jabesh Gilead. (They had stolen their bodies from the public square at Beth Shan, where the Philistines had hung them after they struck Saul down on Gilboa.) David brought the bones of Saul and his son Jonathan from there, and the bones of those who had been killed and exposed were gathered up.   They buried the bones of Saul and his son Jonathan in the tomb of Saul’s father Kish, at Zela in Benjamin, and did everything the king commanded. After that, God answered prayer in behalf of the land. – 2 Samuel 21:7-14

This is an odd passage….no doubt about it.  I guess I can understand the effort to “cleanse” the countryside of people who were part of the coup against David, but the details of this retribution and cleansing are just weird.  The first odd detail is David handing over Saul’s descendants to be killed by the Gibeonites.  Why would he do this?  It seems like he is letting someone else do his dirty work.

The Gibeonites killed 7 descendants of Saul and displayed there bodies on a hill before the Lord.  This is also a strange detail.  Why would the Gibeonites want to display these men’s bodies before the Lord?  I assume this was to serve as warning to others who might be thinking of challenging the rule of David.

The next odd detail is the response of Rizpah, the mother of two of the men killed and put on display by the Gibeonites.  She sets up camp near the bodies and stays for what sounds like months to make sure the bodies are not defiled by birds or wild beasts.  This could not have been a pleasant or easy task.

Water enters in the form of rain from heaven on the dead bodies.  The imagery here is rather gruesome.  Decaying bodies being drenched by rains intended for provision and growth.  As I have reflected on this passage, aside from getting a little queasy, it occurs to me that the rain from heaven is falling on the dead bodies and can only promote decay.  This is similar to the effect of rain on dead plants.  The increased moisture causes mildew and decay rather than growth.

The last odd part of this passage is David’s response to Rizpah’s faithful guard of her son’s bodies.  I guess it makes him realize that he has not given the same faithful respect to the bones of Saul and Jonathan.  He rectifies this by recovering their bones and laying them to rest in their rightful place.

This is a rather bleak scene.  Could there be any hidden encouragement here?  Perhaps there is not.  I guess one could look at a world without God as a bleak, hopeless, dead place of decay and death.  The last sentence suggests that the relationship with God was in some way restored to the land.  Interestingly, there is no mention of restoration of the relationship between God and David.

Prayer: God may your rains fall on growing plants rather than dead ones.