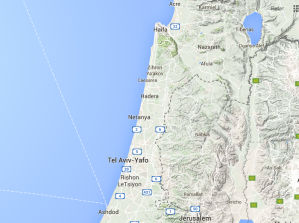 Carmel by the Sea and Jerusalem

As surely as I live,” declares the King, whose name is the Lord Almighty, “one will come who is like Tabor among the mountains, like Carmel by the sea.   Pack your belongings for exile, you who live in Egypt, for Memphis will be laid waste and lie in ruins without inhabitant.   “Egypt is a beautiful heifer, but a gadfly is coming against her from the north.   The mercenaries in her ranks are like fattened calves. They too will turn and flee together, they will not stand their ground, for the day of disaster is coming upon them, the time for them to be punished.   Egypt will hiss like a fleeing serpent as the enemy advances in force; they will come against her with axes, like men who cut down trees.   They will chop down her forest,” declares the Lord , “dense though it be. They are more numerous than locusts, they cannot be counted.   Daughter Egypt will be put to shame, given into the hands of the people of the north. The Lord Almighty, the God of Israel, says: “I am about to bring punishment on Amon god of Thebes, on Pharaoh, on Egypt and her gods and her kings, and on those who rely on Pharaoh. I will give them into the hands of those who want to kill them—Nebuchadnezzar king of Babylon and his officers. Later, however, Egypt will be inhabited as in times past,” declares the Lord. “Do not be afraid, Jacob my servant; do not be dismayed, Israel. I will surely save you out of a distant place, your descendants from the land of their exile. Jacob will again have peace and security, and no one will make him afraid. Do not be afraid, Jacob my servant, for I am with you,” declares the Lord. “Though I completely destroy all the nations among which I scatter you, I will not completely destroy you. I will discipline you but only in due measure; I will not let you go entirely unpunished.” – Jeremiah 46:18-28

The water reference in this passage is a little tangential, but there is an interesting simile about “Mount Tabor” and “Carmel by the sea” that I thought worth exploring.  I had to pull out Google Maps and figure out the geography of this passage.  “Carmel by the Sea” refers to a rocky promontory located along the Mediterranean about 30 miles north northwest of Jerusalem.  Mount Tabor is located just to the east of Carmel by the Sea in the mountains surrounded to the south by a flat plain.

There are those who interpret verses in the new testament about the transfiguration of Christ to have occurred at Mount Tabor (Matthew 17:1-3).  Some have been so convinced as to build an entire church to commemorate this event on Mount Tabor.  My reading of Matthew would suggest that the transfiguration occurred on Mount Herman rather than on Mount Tabor, but I am no biblical scholar so I could be in error.  My logic for favoring Mount Herman over Mount Tabor is based on two details from the Gospel of Matthew: 1) the disciples and Jesus were said to be in “the region of Caesarea Philippi” which is located about 25 miles north of the Sea of Galilee and at the base of Mt. Hermon; and 2) the mountain is described as being a “high mountain”.  Mount Herman would certainly qualify as a “high mountain” at an elevation of 9,232 feet (2,814 m) above sea level.

Irrespective of whether the transfiguration occurred on Mount Herman, Mount Tabor, or some other mountain I think the somewhat odd simile in this passage may be a reference to the coming Messiah, a reflection of Him.  The passage says “one will come who is like Tabor among the mountains, like Carmel by the sea.”  It seems to me what these two locations have in common is that they stand out from their surroundings, Carmel by the sea because it juts into the Mediterranean, and Mount Tabor because it rises from a relatively flat plain.  This is certainly an apt description of Jesus, the One who came to settle the matter of our estrangement with God.

Jesus stood out among the people He came to serve and heal.  He was clearly different – in a good way.  His shoulders reached into the clouds high above us, even while he was kneeling down to wash the disciple’s feet.  The moment when Peter, James and John got to see this duality clearly,  “the Mountain” on the mountain, we refer to as the transfiguration (Matthew 17:1-3).

It is of course possible I am reaching way beyond the meaning of this passage and pulling out a rabbit that is of my own making, but the end of the passage would seem to indicate that a convent relationship is also on God’s mind: “Jacob will again have peace and security, and no one will make him afraid. Do not be afraid, Jacob my servant, for I am with you”.  So at some point Jacob, the nation of Israel, will have peace like a river.

God is promising to extend His Mighty Arm of Peace to all of the exiles and prisoners in the midst of this confusing and scary time where it seems there is terror on every side.  God does the same for all of us willing to confess our role as exiles and prisoners here in the “land of oblivion“.  I am reminded of a song by Natalie Grant called “held”.  In the chorus is a line that speaks to this tension of feeling like everything around us is falling apart in the midst of acknowledging God’s promise to catch us as we fall:

“This is what it means to be held
How it feels, when the sacred is torn from your life
And you survive
This is what it is to be loved and to know
That the promise was that when everything fell – We’d be held”

Prayer: God thank You for reaching out and rescuing us from the “mountain” and holding us when we fall.