Lessons by the Lake 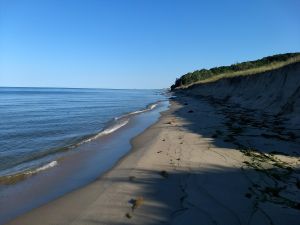 Again Jesus began to teach by the lake. The crowd that gathered around him was so large that he got into a boat and sat in it out on the lake, while all the people were along the shore at the water’s edge. He taught them many things by parables, and in his teaching said: “Listen! A farmer went out to sow his seed. As he was scattering the seed, some fell along the path, and the birds came and ate it up. Some fell on rocky places, where it did not have much soil. It sprang up quickly, because the soil was shallow. But when the sun came up, the plants were scorched, and they withered because they had no root. Other seed fell among thorns, which grew up and choked the plants, so that they did not bear grain. Still other seed fell on good soil. It came up, grew and produced a crop, some multiplying thirty, some sixty, some a hundred times.” Then Jesus said, “Whoever has ears to hear, let them hear.” – Mark 4:1‭-‬9

I do not remember noticing before how often Jesus did His teaching by the lake.  It makes me wonder what it was about this location that made it such a good location for learning about the Kingdom of God and this new way of knowing God.  A few passages back I reflected on how the shore of the lake is like a window between worlds, and that Jesus is a similar spiritual “window”.  He is the bridge and the One River we must cross at the same time – the lion and the lamb.

Interestingly, the crowd gets so large that Jesus needs to leave the land for His teaching.  He boards a boat and makes the lake itself his lectern. On one level this may be a mere logistical necessity to allow Him to get His message out amidst a chaotic crowd, but I wonder if we return to our “window between the worlds” metaphor whether there may be deeper water here.  Jesus teaching from the lake is placing Himself outside the worldly fray to relay spiritual truths from “outside” the window.

He used a parable, a word picture, to teach the crowd to “see” the unseen spiritual reality that is the Kingdom of God all around them.  His story of sowing and seeds clearly has deep spiritual meaning and insights into the undiscovered country for “Whoever has ears to hear”.  The imagery and language here about plants and seeds is reminiscent of language in the old testament.  All the way back in Deuteronomy 32:1-2 God was talking about rain on tender plants, and there are many references to planting oneself by the river so that we can thrive and remain connected to spring of Living Water.

So how do we ensure that we are listening with ears that can hear when God speaks in our lives?  I am not sure “hearing aids” in the form of religious traditions or alter decorations are the answer.  The inner attentiveness that Jesus is talking about here is a soul sense not a physical sense like hearing.  Proper spiritual “hearing” has more to do with posture and perspective than religious rigor. God wants us to channel our hearts, our souls, in such a way that when he whispers we are ready and able to hear Him.

Prayer: God give us ears to hear and eyes to see the unseen so that we can be part of your plans for our lives.