About eight days after Jesus said this, he took Peter, John and James with him and went up onto a mountain to pray. As he was praying, the appearance of his face changed, and his clothes became as bright as a flash of lightning. Two men, Moses and Elijah, appeared in glorious splendor, talking with Jesus. They spoke about his departure, which he was about to bring to fulfillment at Jerusalem. Peter and his companions were very sleepy, but when they became fully awake, they saw his glory and the two men standing with him. As the men were leaving Jesus, Peter said to him, “Master, it is good for us to be here. Let us put up three shelters—one for you, one for Moses and one for Elijah.” (He did not know what he was saying.)While he was speaking, a cloud appeared and covered them, and they were afraid as they entered the cloud. A voice came from the cloud, saying, “This is my Son, whom I have chosen; listen to him.” When the voice had spoken, they found that Jesus was alone. The disciples kept this to themselves and did not tell anyone at that time what they had seen. – Luke 9:28‭-‬36

Today’s passage involves a hike with some unexpected events and visitors.  I love to hike and be in the mountains.  I grew up near Seattle only a 45 minute drive from the Cascade Mountains and unlimited hiking opportunities.  The mountains being described here are somewhat different in that this is a desert environment and the mountains are isolated and probably not as high as the cascades. According to Christian tradition, Mount Tabor is the site of the transfiguration of Jesus in this passage. Mount Tabor (הר תבור‎ (Har Tavor) is located in Lower Galilee, Israel, at the eastern end of the Jezreel Valley.  It was about 18 kilometres (11 mi) west of the Sea of Galilee so if they were hiking from the the Sea of Galilee it would have been a 3-4 hour hike to the base of the mountain. 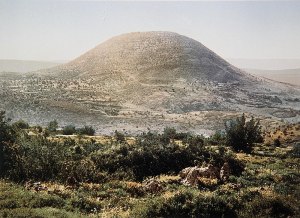 This story comes eight days after a very important conversation Jesus had with his disciples.  In Luke 21 Jesus predicted His own death and resurrection “The Son of Man must suffer many things and be rejected by the elders, the chief priests and the teachers of the law, and he must be killed and on the third day be raised to life.”  I think this is important context for this passage.  I am sure Peter, John, and James were still puzzling over his prophetic prediction.  This event is intended to bring clarity to their conundrum.

Jesus was praying with Peter, John, and James presumably looking on or praying with Him it is not clear.  They were certainly near enough to witness what happened next.  Jesus’ face changed and his clothing began to emit light “as bright as a flash of lightning”.  Luke is not specific about how Jesus’ face changed, he simply states that “the appearance of his face changed”.

One of the most popular posts (viewed 1138 times) I have ever written is called “As Water Reflects the Face“.  Interestingly this post was about Proverbs 27:19, “As water reflects the face, so one’s life reflects the heart.” – one of the shortest water-related passages I have encountered.  I am not sure why this post is popular, but it seems to resonate for some reason.  It is about how our faces  reveal much about our emotions and the state of our inner soul. The change of face happening here is a revealing of something fundamental and elemental about Jesus that these men have only seen glimpses of before.

His clothing was also changed, enveloped in a bright light like lightening.  Perhaps this is a result of an open window to the spiritual realm where Elijah and Moses are dwelling.  Sort of like the bright light that streams into a darkened room from a brightly lighted room.  Peter, John, and James were in the “darkened room” getting drowsy when this bright light shone in and woke them up!  “Peter and his companions were very sleepy, but when they became fully awake, they saw his glory and the two men standing with him.”

I find it interesting that the men are described as being “sleepy” and could only see God’s glory and the miraculous visitors when they were “fully awake”.  This is the hidden well in this passage for me.  Am I fully awake so that I can see and experience God’s glory like this? If not why not?  What would it take to become more awake so I can experience God’s glory more often?  These are all difficult questions and I will not pretend to fully understand their answers, but they are certainly worth chewing on.

There has been a lot of discussion and discourse lately about being “woke”.  Wikipedia has this description “Woke is a political term originating in the United States referring to a perceived awareness of issues concerning social justice and racial justice. It derives from the African-American Vernacular English expression “stay woke”, whose grammatical aspect refers to a continuing awareness of these issues.” I am not going to get into the politics of the term or whether it secular or sacred, but Jesus was very much concerned with social justice and racial justice.  He was constantly tearing down barriers between people and their prejudices.  He woke people all the time to the important spiritual aspects of their lives and how to love God, receive God’s love, and love one another, regardless of social class or race.

Returning to the spiritual awakening that Peter, john, and James are experiencing we find that as they are looking on this surreal scene they are somewhat confused about what they should be doing.  Peter, never one to let a silence go for too long, speaks up “Master, it is good for us to be here. Let us put up three shelters—one for you, one for Moses and one for Elijah.” (He did not know what he was saying.)”  Peter does not know what to do with the glimpse into the spiritual realm they have been given so he proposes a supremely secular solution.  Let’s build a “church”.

God intervenes is an elemental way to set him straight, “While he was speaking, a cloud appeared and covered them, and they were afraid as they entered the cloud. A voice came from the cloud, saying, “This is my Son, whom I have chosen; listen to him.”  No need to build a shelter, plan a pot luck, or decorate the altar with unnecessary things.  All that was required was to “listen to Jesus, God’s Son”.  This is the important part of this well known passage for me.  We can spend all sorts of energy and time trying building shelters for Jesus and “fixing” things in this world, and we should be doing that as faithful followers of Christ, but I think it needs to start with what God said to these “woke” men – “listen to him”.

Prayer: God you are a champion for those who are hurting and helpless.  Help us to listen to your Son and follow His lead in healing and helping.