The Area that Belongs to the Prince 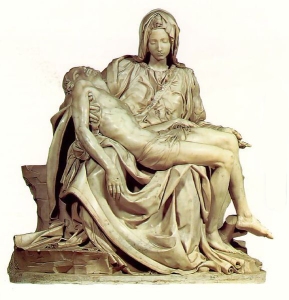 The “pieta” by Michelangelo

Well this is the last passage in Ezekiel. It has been quite an interesting stretch of river with many unexpected rapids and waterfalls. Today’s passage is really a continuation of previous passage which defined the borders of Israel. It could not be more timely.  In response to the United States  locating it’s embassy in Jerusalem the United Nations recently voted not to recognize Jerusalem as the capital of Israel. I am reminded once again how timely a prophecy from thousands of years ago can be.

This passage talks specifically about the area that “belongs to the prince”. This presumably refers to seat of power at the time for the nation of Israel, Jerusalem the city of David. I want to make it clear my intention here is not to wade into this political debate about who should control Jerusalem. Ultimately, I do not think anyone but God can take ownership of anything here on earth, this includes Jerusalem.

This passage suggests that it is the descendants of the tribes of Israel and the Levites that are to control this area, but as was mentioned yesterday foreigners living in that area are to be treated as if they were native-born Israelites, including with regards to inheritance. I am sure some have used this passage to argue that God has decreed that Israel should control Jerusalem.  I think this is a gross oversimplification. I can see how one could view this passage as a mandate for the people of Israel to exert sovereignty over Jerusalem. I do not think that is what this passage is saying.

I think it is saying that this area is in fact under the control of “the prince”.  Seen in the light of eternity I would say that “the Prince” referred to here is actually the Prince of Peace, the Messiah, Jesus.  Seen in that context it would mean that Jerusalem is owned by God, not Jews, Arabs, or anybody else who have taken ownership of it.

So what would this kind of radical view of ownership look like? I think it would look like nothing we have seen in the modern “peace talks”. It also would not look like the bloody battles of the crusades. It would look radically different. It would require all parties to take as their starting point that no one owns Jerusalem, or anything on this Earth for that matter. It is the Dominion of the “prince”, Emmanuel, who is the prince of all people, Jew and gentile, who call upon His name.

I find it interesting, and somewhat ironic, that the southern border of the region being described here is the “waters of Meribah Kadesh”  Moses and Aaron famously failed their “Meribah Test” when God asked them to faithfully follow Him and lead His people toward Him rather than away from Him. It strikes me that this is still occurring today.  There are leaders in Israel, from all parts of the political and religious spectrum, that are leading people away from God rather than toward Him.

Prayer: God may Your peace reign in Jerusalem and around the world. May leaders seek Your Prince of Peace.